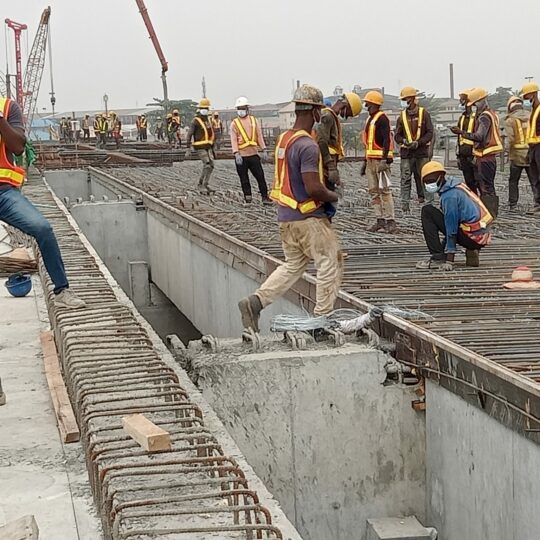 Lagos State Government on Wednesday began the final 24-hour construction on the Alaba Interchange Bridge linking the Lagos-Badagry Expressway to the Apapa-Oshodi Expressway.

About 400 metres already completed part of the bridge on the Lagos-Badagry Expressway is being extended by 600 metres.

Heavy duty concrete pumps were seen transferring concrete into various formworks on about 600 metres stretch being constructed from the completed portion to link Apapa-Oshodi Expressway.

Formworks are wooden frames that work like buckets or casings where freshly mixed concrete is stored in different shapes before it solidifies to become a permanent structure.

He said it would take 24 hours to complete the continuous casting.

“We are doing massive concrete works on the Alaba Interchange. Earlier, the deck has been done. There is a Box Girder to be fixed at Akinwande on the expressway.

Thomas said that the Section One of the Lagos-Badagry Expressway project is being handled by the Chinese Civil Engineering Construction Company (CCECC).

It is supervised by the Lagos State Government and divided into segments.

He said that the Alaba Interchange part of the project falls under Section Two, adding that the construction would bring the project to “Second Rainbow’’ Bus stop area on the Apapa-Oshodi Expressway.

“It is going to flyover the Apapa-Oshodi Expressway; for this segment we are 50 per cent into it,’’ he said.

Receiving 75 students of 400-Level and 500-Level of the University of Lagos (UNILAG), who came to see the project, Thomas said that the bridge work was part of the massive project awarded about 10 years ago.

He said about 300 tonnes of reinforcement and about 600 cubic volumes of concrete were going into the 24-hour continuous construction.

He said the invitation to the UNILAG students was to let them have first-hand knowledge of the construction under the leadership of Gov. Babajide Sanwo-Olu, an alumnus of the institution.

Mr Lateef Shomide, Project Director on the Lagos-Badagry Expressway, said massive reinforcement was simultaneously on-going at Iyana-Iba Interchange which flies to LASU/Iba Road on the highway.

He said that interchange was going to be three times the size of the Alaba Interchange and will gulp about 2,500 cubic metres of concrete and more than 550 tonnes of reinforcement.

“The reinforcement is on-going but we are likely to cast that one, by the grace of God, in January,’’ he said.

Yaowu said that issues of land acquisition, funding and skyrocketing prices of construction materials were some challenges that affected the project.

Dr Adeyemi Adebote, a UNILAG Transportation Engineer who represented the Departments of Civil and Environmental Engineering led the undergraduates to the site.

He expressed joy at the opportunity given the students to experience practical construction.

Some of the students including Miss Azumta Ibiam, a 500-Level student who spoke with NAN said they were excited to have practical knowledge to aid better understanding of theoretical aspects of engineering courses.

NAN reports that the reconstruction of Lagos-Badagry Expressway, Lot 2A, from Mazamaza to Okokomaiko with a distance of 14.8km is an on-going project awarded by Lagos State Government to Messrs CCECC Nigeria Ltd.

The Alaba Interchange Bridge is one of the three interchange bridges currently under construction on the corridor.

The purpose of the interchange bridge is to carry traffic from the Toll Lanes on both sides of Lagos-Badagry Expressway and connect them to Service Lanes and other inner roads.

It is a major link road to FESTAC Town