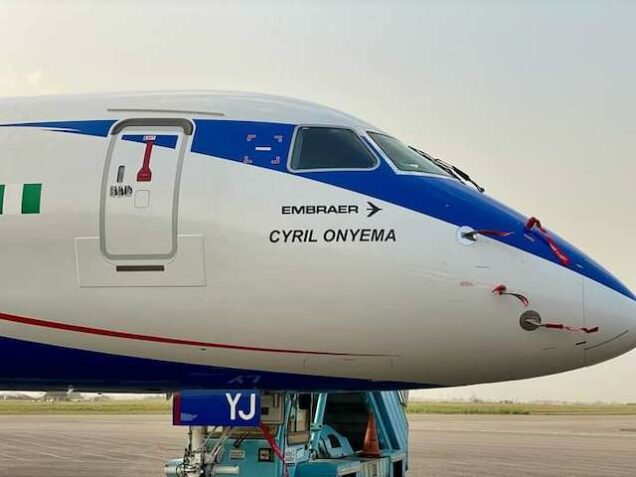 West and Central Africa’s leading airline, Air Peace, has taken delivery of its fifth Embraer 195-E2 aircraft, out of the 13 ordered.

The plane with reg number 5N-BYJ arrived at the Murtala Muhammed Airport, Lagos on Thursday.

The spokesperson of Air Peace, Mr Stanley Olisa, told newsmen in Lagos that the new acquisition would further enable the airline to meet the growing air travel demands of Nigerians.

Olisa explained that the modernisation of fleet is to achieve the no-city-left-behind ambition of the airline.

He stressed that just about two weeks ago, the airline brought in two new Airbus 320s to boost domestic and regional connectivity.

The fifth Embraer 196-E2 aircraft, is among the 13 ordered from the Brazilian aerospace conglomerate, Embraer, in 2019.

Eight planes remain to be delivered by 2022.

“The airline plans to activate purchase rights for 17 of the same aircraft model once the initial 13 are delivered, totalling 30 ultra-modern airplanes.

“We are determined to give the flying public world-class flight experience and to achieve this, we decided to invest in state-of-the-art aircraft through strategic fleet expansion.

“Our fleet are increasingly becoming modern and it is all to help reduce the air travel burden of Nigerians,” he said.

Olisa assured Nigerians of adequate flights this festive period, asserting that a good number of aircraft would be returning from overseas maintenance.

He added that this would further increase the frequencies of specific routes and bolster overall operations.

It operates an increasing modern fleet of 33 aircraft, including five E195-E2s and 2 Airbus 320s.