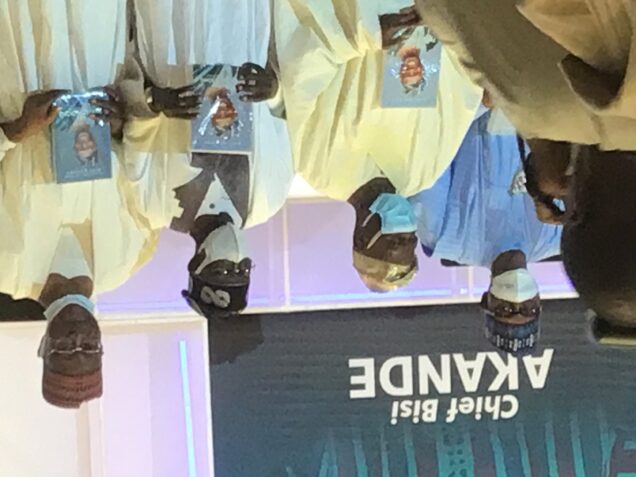 Tinubu said this on Thursday at the public presentation of Akande’s autobiography, titled, “My Participations.”

According to him, Akande remains a hero and a figure so exemplary and excellent.

“Our lives are better because of the selfless public and private contributions he has made to this national family we call Nigeria.

“Baba Akande represents what a public figure in Nigeria ought to be. He is what many should aspire to be.

“The book truly affirms that Chief Akande places a high premium on integrity and truthfulness. It could not be otherwise.

“Indeed, many say President Buhari and Chief Akande are two of a kind: honest, resolute, patriotic, and committed to their beliefs. I concur in that comparison,” he said.

Tinubu said that Akande’s written record of the events, ideas, and lessons of his profound life would serve to enlighten and educate both the present and the future.

According to Tinubu, from humble beginnings, Baba Akande rose through hard work, intellect, courage, perseverance, sacrifice, dedication, and what he called ‘self-tuition’.

Recounting several offices Akande had occupied, Tinubu added: “Baba did not walk the easy road. He earned things the hard and principled way. Nothing deterred him.

“Though easy-going in demeanor, he was always strong of character. Without seeing the four walls of a university, Chief Akande tutored himself so well that by age 22, he had become a qualified accountant.

“People saw in him the rare combination of the gifts of fairness, tolerance, and vision.”

The APC national leader said that because of his outstanding qualities, Akande was chosen as chairman of the Alliance for Democracy (AD), Action Congress (AC), and the Action Congress of Nigeria (ACN).

He said that as a crowning achievement regarding party leadership, Akande served as the APC interim chairman, helping to shepherd the historic merger of several major parties into one in 2014.

“Without Baba Akande’s sage guidance, that merger might never have come to pass.

“We owe him deep gratitude for his singular devotion to consummating the complicated merger in such a positive manner that then Candidate General Muhammadu Buhari was able to demonstrate his popularity by achieving a monumental victory in the 2015 election.”

Tinubu said that the connection he shared with Akande was as longstanding and broad as fellow travelers in the struggle for democracy and progressive governance.

The chairman of the occasion, Dr. Ogbonnaya Onu, said that Akande’s 82 years had been years of service to fellow human beings.

Onu, who is the Minister of Science, Technology, and Innovation, said that Akande was a self-made man, as he worked very hard and was determined to succeed in life.

”The author of the book is a man with a complex personality. In addition to his ever-smiling face, he is full of jokes, which can at times be very expensive.

”He always stood by what he believed in. His honesty spoke for him at all times. He was born poor but never allowed that to deter him.

”He became a politician’s politician, but remained humble,” he said.