Ezeife, we’re not kneeling down with you 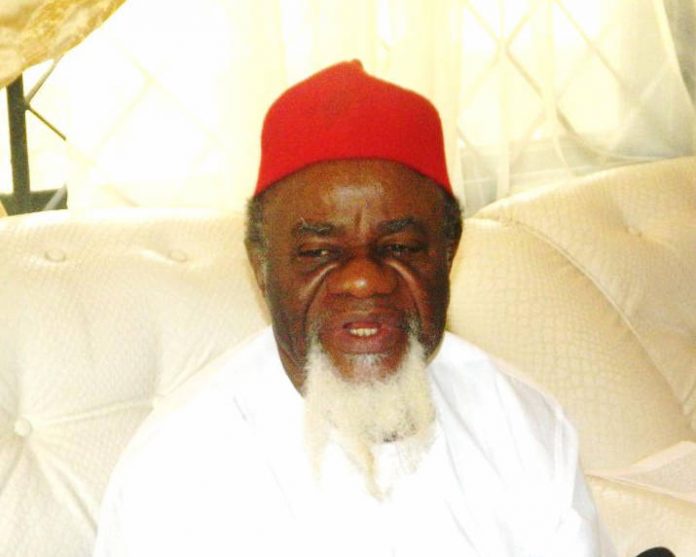 Chief Chukwuemeka Ezeife, Okwadike Igbo Ukwu, former Federal Permanent Secretary, former Governor of Anambra State, PhD Harvard, has shot over the bar. He has misfired. Ezeife has committed a sacrilege. He has committed an abomination against the Igbo culture.

Ezeife had told a gathering in Abuja that the South East, or the Igbo, were prepared to “kneel for any region to garner support to clinch the Presidency in 2023”.

His words: “Even though the Igbo people don’t prostrate, but this time, we are prepared to kneel down to every part of Nigeria, every group, every ethnic group in Nigeria. We are prepared to even prostrate because we believe in this country.”

Haba!, Chief Ezeife, we humbly beg to disagree. We are not kneeling down with you to anybody. We don’t kneel down to any human being, or to any mortal. We are not prostrating to any group of people, no matter what.

It’s true that the Igbo somehow need the Presidency. The Igbo, perhaps, want to be President in 2023. But the Igbo will not be so desperate for the Presidency as to go against their tradition, against their culture, by kneeling down or prostrating to fellow human beings, no matter how highly placed.

The Igbo are major stakeholders in the Nigerian project. They have contributed more than any other ethnic group to the making of Nigeria, to the development of the country, in terms of infrastructure, intellect, and business. The Igbo are all over the country, working assiduously to make Nigeria great. They have been building bridges of cooperation among all people of Nigeria. The settle wherever they find themselves, build their own houses, speak the language of their host, and marry from the people.

Unfortunately, the Igbo have not been fairly treated in Nigeria. They have not gotten what they consider as their due share in the country. The Igbo are the only major ethnic group that have not tested the Presidency of Nigeria, save for the six months of the ill-fated General Ironsi regime. Therefore, for purposes of equity and fairness, it is appropriate that the Igbo be allowed to produce the President in 2023.

Kneeling down, or prostrating before any mortal, before any created being, is not in the Igbo character. It is not part of the Igbo culture. The Igbo kneel down and prostrate only to the Supreme Deity, the Creator of Heaven and Earth.

Olaudah Equiano, a ninteeth century former Igbo slave boy, in his Memoir, described the Igbo people of his days as “happy clean people, without unemployment, without prostitution, without drunkards, and without beggars”.

The Igbo of today may not be quite different from the Igbo of those days, unless there are counterfeit Igbo in their midst, people foreign with blood. The original Igbo are self-content, self-satisfied, somehow proud of themselves.

The people are not beggary, and not subservient to anybody or to any group people. In other words, the Igbo will not beg for what they consider should be their right. They will not prostrate to get what they believe is their entitlement.

The Igbo are not strangers in Nigeria. They did not come from the moon, or from any foreign land. They are citizens of the entity called Nigeria. Therefore, the people should not be treated as second class citizens by consistently denying their rights, or edging them out of the scheme of things.

The Igbo have equal rights, and equal stake in the Nigeria project, and should be accorded equal recognition. There should be no discrimination or marginalization of the people. That is the crux of the matter. The genesis of the present Nigerian problems, where some people behave as if they alone own Nigeria, while others are mere onlookers.

In any case, is 2023 Presidency the priority of the South East or the Igbo? A lot of people may answer in the negative. An Igbo President in 2023 under the present structure of Nigeria will be a lame duck. He will not be able to do anything for the Igbo until he climbs down. And they will blame him like Goodluck Jonathan.

Therefore, what Chukwuemeka Ezeife should have been asking for, if he wants to kneel down, is for the restructuring of Nigeria and not Igbo the Presidency in 2023, which will, in the long run, amount for nothing.