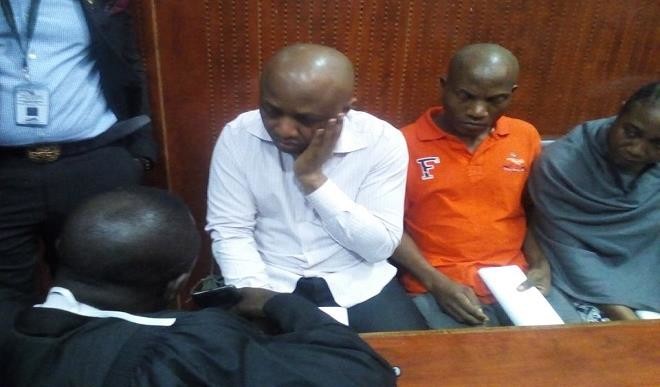 File photo: Evans and other suspects in court

An Ikeja High Court has reserved judgment for Feb. 25, 2022, in the case of alleged billionaire kidnapper, Chukwudimeme Onwuamadike (alias Evans), and five others charged with conspiracy and kidnapping.

The defendants are accused of kidnapping Mr. Donatus Dunu, the Managing Director of Maydon Pharmaceuticals Ltd. on Feb. 14, 2017.

Contrary to false viral online reports, this is the first judgment to be fixed in any of the five kidnapping cases currently involving Evans in the high courts of Lagos State.

Evans is facing trial alongside diverse co-defendants before Justices Hakeem Oshodi of an Ikeja High Court, Oluwatoyin Taiwo of an Ikeja Special Offences Court, and Adedayo Akintoye of an Igbosere High Court.

On Friday, Oshodi gave the judgment date after oral submissions of final written addresses by prosecution and defence counsel.

Evans’s counsel, Mr Victor Opara (SAN), while making his oral submission, asked the court to discharge and acquit Evans of the two-count charge before it.

In a final written address dated Nov. 1, Opara had said there was no direct evidence linking Evans to the alleged crimes.

He told the court that Dunu, the alleged kidnap victim, said to be blindfolded throughout his 88-day ordeal, did not state to the court in his testimony, that he could physically identify Evans.

“There is also the fatality of the prosecution’s case that there was no identification parade to identify the first defendant (Evans).

“There was no evidence before your lordship to show that PW2 (Dunu) had a clear opportunity of identifying the first defendant,” the SAN said.

Lead prosecution counsel, Mr. Adebayo Haroun, via a final written address dated Nov. 30, had asked the court to convict the defendants as charged.

On Evans, he said: “When a man has confessed to the crime, you do not need an identification parade.

“There is direct evidence of PW2 (Dunu) testifying of how he was kidnapped, how he escaped, and the roles the defendants, each, played.

“We have circumstantial evidence linking the first defendant (Evans) to the crime, and we also have confessional statements and video recordings of him.

“We urge your lordship to convict the defendants as charged,” Haroun prayed.

The defendants were arraigned before Oshodi on Aug. 31, 2017, on a two-count charge of conspiracy and kidnapping.

According to the prosecution, Dunu was kidnapped on Ilupeju Road, Lagos State, and the defendants collected 223,000 Euros as ransom from his family.

The prosecution closed its case against the defendants on Jan. 10, 2020, after presenting four witnesses, including Dunu.

Defense closed its case on Aug. 3, 2020, after the six defendants testified.

During their respective testimonies, all the defendants said that they were innocent.