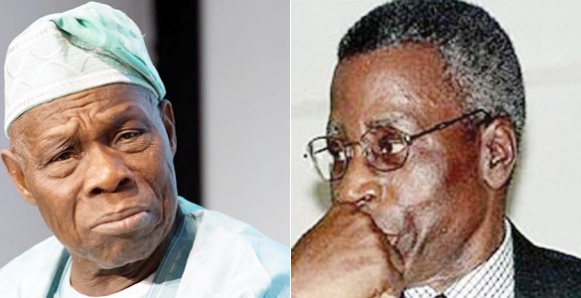 Akande, a former Interim National Chairman of the All Progressives Congress, stated this in his book, titled ‘My Participations,’ which was presented in Lagos on Thursday.

The former Governor described Obasanjo as a faithless suitor and an unblinking political philanderer.

He narrated how Obasanjo came hunting for prominent members of the Alliance for Democracy after the assassination of Bola Ige.

Akande said, “We were like sheep without a shepherd. The AD had lost its lodestar for guidance and we were left on the open sea like a floundering ship. Soon, the sharks were circling.

“The man who came hunting for us was President Olusegun Obasanjo, Ige’s friend for many years who became our relentless foe. He and Ige met in the late 1960s when both of them served in the government of then Colonel Adeyinka Adebayo, the second military ruler of the old West. Since then, Obasanjo had dogged Ige’s path like an evil spirit.

“During his reign as military Head of State, Ige gave him a wide berth, yet Obasanjo would not disappear from Ige’s path. In 1982, it was Obasanjo’s unsolicited intervention into the crisis in the Oyo State UPN that led to the ‘Night of the Long Knives’ in Yola which almost cost Ige his job as the governor of old Oyo State. His final dalliance with Ige eventually cost Ige his life.”

Akande, who described Ige and Obasanjo as victims of Sani Abacha’s military dictatorship, recalled that Obasanjo was sent to Yola Prison and Ige to Makurdi Prison.

He said, “When Obasanjo made up his mind to contest for the presidency, he rushed to Ige’s residence in Ibadan to seek his support. Ige declined, promising him however that they would meet on the field of electoral combat on opposing sides.

“Ige knew Obasanjo’s deep-seated hatred for our leader, Chief Obafemi Awolowo, a public confession to which he devoted his book, ‘Not My Will’. What Ige did not reckon with was the unrelenting hostility of some members of Afenifere leadership to his aspiration to become the presidential flagbearer of our party, the AD, and its alliance partner, the APP.”

Akande noted that Chief Olu Falae eventually emerged the flagbearer of the alliance, but Ige led Falae’s presidential campaign in the South-West.

He said, “Obasanjo won and yet, would not leave Ige alone. Obasanjo visited Ige three times in his Bodija home, Ibadan, after he emerged as the President-elect, pressuring him to come and take up the ministerial appointments.

“Ige finally agreed to serve when he was given the go-ahead by our movement Afenifere, and our party, the AD. It was late before he realized it was a kiss of death. All this made me wary of Obasanjo’s relentless dalliance. I knew him to be a faithless suitor and an unblinking philanderer on the political field. You trust him at your own peril.”