SGF Mustapha: 'The level of insecurity in Nigeria today is so high' 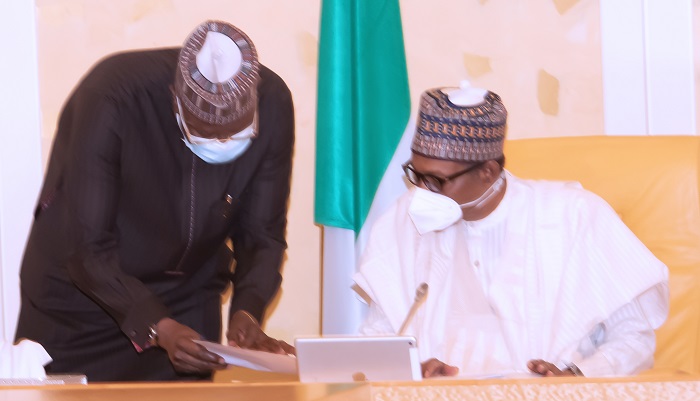 The Secretary to the Government of the Federation (SGF), Boss Mustapha, said the level of insecurity in Nigeria today is so high.

He, however, called on Nigerians, especially religious and traditional rulers to continue to support the implementation of various Federal Government policies on promoting peaceful coexistence.

Mustapha made the call while declaring open the 4th quarterly meeting of Nigeria Inter-Religious Council (NIREC), with the theme “NIREC, Security agencies and peace in Nigeria” which was held in Abuja on Thursday.

The SGF, who hailed the theme of the meeting, noted that it was very apt, considering the fact that peace and security were very critical ingredients for growth and development.

He stressed the need for the Council to work hard and support the implementation of President Muhammadu Buhari’s peace and security policies.

He urged religious leaders to continue to ensure peace and harmony in the country, including preaching peace and promoting youth engagement.

According to the SGF, insecurity which did not just creep into the society, must not be left to continue to fester, as religious leaders have a great role to play while working with relevant security agencies.

“ The level of insecurity in Nigeria today is so high that religious and traditional rulers must assist the government to usher in peace.

“Religious leaders should publicly reject the idea of those who claim to be killing in the name of religion by giving a counter-narrative,’’ he said.

He stated that If there were serious issues that threatened the peace and security of the nation, Christians, and Muslims, under the umbrella of NIREC, should suggest to the government the best ways out.

He reiterated that Government would continue to give all necessary support to religious and traditional rulers that would promote justice and equity.

The Executive Secretary of NIREC, Prof. Cornelius Omonokhua, stressed the need for a cordial relationship and collaboration between the citizens and security agencies.

He stated that in the war against insecurity in the nation, there was the need for intensified collaboration between citizens and security agencies.

Omonokhua urged unity among all security agencies as “ a force divided among itself lacks the morals to fight insecurity and a compromise among security agents is a risk.’’

He called on the FG to continue to support and motivate security agencies through improved remuneration, sophisticated weapons, better living conditions, life insurances, and up-to-date training.

He also called on participants to resist the narratives of terrorists who want to turn Christians and Muslims against each other.

In his goodwill message, Sultan of Sokoto Muhammad Sa’ad Abubakar said the unifying force of security authorities should be effective enough to promote peace.

“ I want to urge us all to discuss issues that promote goodwill and peace among us, not issues that divide us.

“ God did not make mistakes when he gave us different religions.

“One of our major problems is injustice, which is perceived in different ways,’’ he said.

He called on religious leaders to be wary of their utterances, as it often contributed to the insecurity in the country.

“ I also urge us all to face and find lasting solutions to other issues such as unemployment, rape, hunger, child marriage, poverty, demanding good governance instead of making sensitive remarks on religion,” he said.

In his remarks, Co-Chairman of NIREC, Rev. Samson Ayokunle, said neither security nor insecurity had a religion and urged everyone to rise up to present realities.

He acknowledged the unrelenting war of the military against insecurity and urged all security agencies to be professional in the discharge of their duties, as there was no better time to do so.

He said there were differences in politics, tribes, and beliefs, adding that such differences did not mean division.