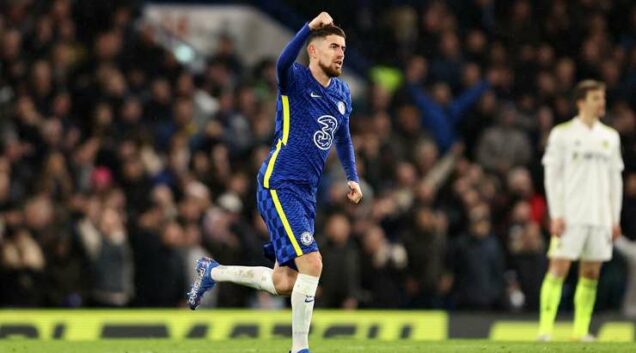 Jorginho scored two penalties, including one in injury time as Chelsea managed to beat Leeds United 3-2 at Stamford Bridge on Saturday.

The visitors opened scoring on 28 minutes from the penalty spot.

Raphinha ran up to the ball, stopped and waited for Edouard Mendy to move before slotting the penalty into the bottom left corner.

Chelsea equalised on 42 minutes from a superb work from Marcos Alonso, who played a vital role in the build-up.

He squared it to Mason Mount, who beat Illan Meslier with a brilliant shot into the bottom left corner.

Jorginho made it 2-1 for Chelsea on 58 minutes from the penalty spot, with a perfect strike into the top left hand corner, giving goalkeeper Illan Meslier no chance.

Tyler Roberts provided Joe Gelhardt with a nice pass inside the box. It allowed him to finish with a strike into the middle of the goal.

Chelsea got a lifeline on added time as the referee awarded a penalty, which was scored by Jorginho.