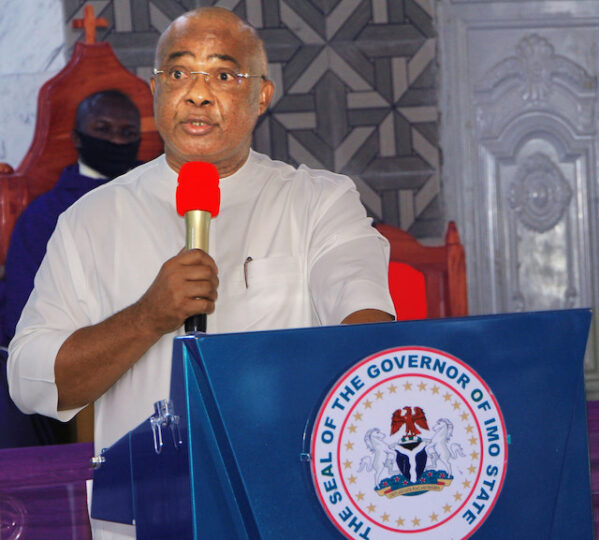 Governor Hope Uzodimma of Imo State said the Kingsley Ozumba Mbadiwe University in Ogboko, Ideato South is now a full state university, owned by the people and for their benefit.

Uzodimma said this Friday at the Sam Mbakwe International Cargo Airport Owerri on arrival from Abuja.

Uzodimma said his administration rejected an attempt by an individual to convert the university built and furnished with the tax payer’s money.

On Wednesday, the Certificate of Ownership of the university was presented to him by the Executive Secretary of National University Commission (NUC), Prof. Abubakar Adamu Rasheed.

The Governor added that “the need to have full grasp of the University is anchored on the growing youth population in Imo State and level of drop-outs resulting from inability of these youths to secure admission in the tertiary institutions.

“The need for more higher institutions in Imo State became inevitable and to that end, Government has to encourage the youths by securing the second state owned university.”

On the return of illegally acquired landed property in Imo State to the rightful owners based on the recommendations of the Committee on the Review of the White Paper on Land and Other Related Matters which government set up for that purpose, the Governor said it is a promise his administration made which it has kept.

He further added that his administration is driven by the three cardinal points of Reconstruction, Rehabilitation and Recovery.

To achieve the vision, his government is busy “reconstructing the roads and recovering government assets, in addition to rehabilitating all the moribund factories/industries that were in bad state” before he assumed office.

“Put together there is no doubt that the Shared Prosperity Government is making progress to satisfy the expectations of Imo people,” he added.

The Chief of Staff, Barr. Nnamdi Anyaehie and some members of Imo State Executive Council were also at the airport.