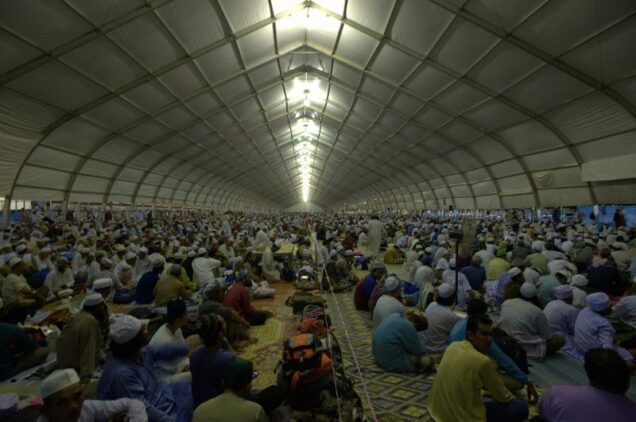 Tablighi Jamaat, the Islamic sect which operates in Nigeria and many West African countries, has been banned by the Saudi Arabian authorities, which accuses it of being a terrorist organisation.

The sect, with an affiliate Dawah group, has about 400 million members worldwide.

It was called by Saudi Arabia as one of the gates of terrorism that all muslims should distance themselves from.

The Saudi Ministry of Islamic Affairs directed the mosques to warn people against associating with them during the Friday sermon.

He said the Sunni Islamic organisation poses “a danger to society”.

In a series of tweets, the ministry said: “His Excellency the Minister of Islamic Affairs, Dr. Abdullatif Al_Alsheikh The preachers of mosques and mosques in which Friday prayers are temporarily held, by dedicating the next Friday sermon 6/5/1443 AH to warn against (the Tablighi and Da’wah group), which is called (the Beloved).”

3- Mention their danger to society.
4- Statement that affiliation with partisan groups, including (the Tablighi and Da’wah Group) is prohibited in the Kingdom of Saudi Arabia.

Further, the ministry directed that the sermon include topics like:

1. The misguidance, deviation and danger of this group, and that it is one of the gates of terrorism, even if they claim otherwise.
2. Mention their most prominent mistakes.
3. Mention that they are a danger to society.
4. A statement that affiliation with partisan groups, including (the Tablighi and Dawah Group) is prohibited in the Kingdom of Saudi Arabia.

The Tablighi Jamaat – which means ‘Society for spreading faith’, was founded in India in 1926. It urges Muslims to be religiously observant, especially with respect to dressing, personal behaviour, and rituals.

The organisation is estimated to have around 400 million members across the world.

Apart from Nigeria, the sect is also active in many West African countries, from Mauritania, Senegal, Mali, Gambia, to Benin and Cameroon.

Tablighi Jamaat has been banned in some Central Asian countries such as Uzbekistan, Tajikistan and Kazakhstan, where its puritanical preachings are viewed as extremist.

Tablighi Jamaat has also been criticised within Islamic circles and the major opposition in the Indian subcontinent comes from the Barelvi movement.
WATCH: TABLIGHI JAMAAT IN NIGERIA

To make Muslims “better” believers, the founder of Tablighi, Mawlānā Muhammad Ilyās (ca. 1885–1944) insisted that it was the duty of not just a few learned scholars but all Muslims to carry out tablīgh (Islamic missionary work).

The missionary tours (khurūj) by lay preachers became the hallmark of the Tablīgh-i Jamāʿat, which was officially established by Ilyās in 1927 in Delhi.

The sect focuses on exhorting Muslims and encouraging fellow members to return to practising their religion as per the Islamic prophet Muhammad.

They stress only matters of ritual, dress, and personal behaviour.

It developed as a response to the perceived deterioration of moral values and the supposed neglect of aspects of Islam.

The movement aims for the spiritual reformation of Islam by working at the grassroots level. The teachings of Tabligh Jamaat are expressed in innovated “Six Principles”: Kalimah (Declaration of faith), Salah (Prayer), Ilm-o-zikr (Reading and Remembrance), Ikraam-e-Muslim (Respect of Muslim), Ikhlas-e-Niyyat (Sincerity of intention), and Dawat-o-Tableegh (Proselytizaton).

Tablighi Jamaat denies any affiliation in politics and it also denies any involvement in Islamic jurisprudence.

Instead, it claims that it focuses on the study of the sacred scriptures of Islam: the Quran and the Hadith.

However, the group has been accused of maintaining political links.

The U.S. Government has closely monitored Tablighi Jamaat since September 11, 2001.

Tablighi Jamaat leaders have denied any links with terrorism.

Tablighi Jamaat strictly avoids getting involved in political activities and debates, instead of participating in politics, it only focuses on religion.

Tablighi Jamaat admits that it attracts all sorts of individuals, regardless of their social and political stances and it doesn’t control its members.
*Background on Tablighi Jamaat from Wikipedia