Atiku: Nothing else compares with education 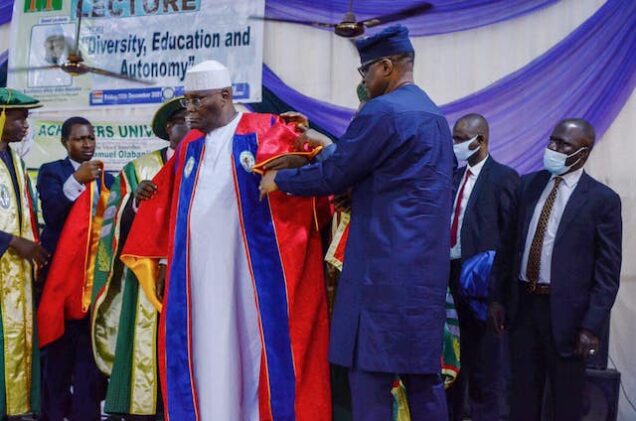 Alhaji Abubakar Atiku, former Vice President of Nigeria, has declared that there is nothing else that can compare to education in the life of anyone that desires growth and better life for his country.

Atiku stated this on Saturday at the 11th Convocation and 14th foundation anniversary of the Achievers University, Owo, in Ondo State.

Atiku who was conferred with honorary doctorate, tasked both government and the Nigerian students to focus more on human development rather than concentrating on oil and gas of the country.

He said if students could perform well in their academics, they should be able to do well in other aspects of human endeavour.

According to him, “if Nigeria can get its education right, it will be on top of the world,” saying that there is nothing as good as education.

“I am challenging you especially the female ones. Take up leadership roles and come forward in leading this country,” he said.

He commended the institution’s management for the infrastructural development in the university.

Earlier, Prof. Samuel Aje, the Vice Chancellor (VC) of the institution, noted that a total of 434 students graduated from various departments of the University.

He said Miss Oluwatosin Oreofejesu Adeoye, in the B.Sc Microbiology programme, was the overall best graduating student for the 2020/2021 set with Cumulative Grade Point Average (CGPA) of 4.82.

Aje said the university had initiated full free tuition fees in 12 academic programmes for three consecutive years, and 50 per cent tuition fee reduction in five programmes in the Colleges of Engineering and Technology, throughout their five-year course duration.

The VC added that 94 per cent of the academic programmes run in the school, including its postgraduate studies, currently had full accreditation, while others were due for accreditation.

He tasked the graduands to be worthy ambassadors of the institution, adding that they should contribute their own quotas to nation building.

Also speaking, Dr Bode Ayorinde, the Pro-Chancellor and Chairman of Governing Council of the University, said that the graduands were fortunate to be conferred with degrees of the University.

Ayorinde explained that the convocation marked the 14th year since the university was established.

He said the institution’s vision is to be the best university in Africa, and indeed one of the best in the world.

He appreciated Idashen Community for being fantastic hosts, including landlords to the university.

“Your generosity in the process of transferring about 200 hectares of land for the use of the university and your accommodation posture, as well as cooperation so far, have been profound and commendable,” he said.

He noted that the student population of the university is nearing 3,000, applauding parents and students of successive sets for their trust in the school.

According to him, the next star projects: Colleges of Medicine, Education and Aviation, have been captured among other infrastructural imperatives of the institution, in celebrating its 15th anniversary in 2022.

Gov. Oluwarotimi Akeredolu of Ondo State commended authorities of Achievers University for providing scholarship for students who might not have had opportunity of getting higher education.

Represented by Mrs Lola Amuda, the Permanent Secretary in the state Ministry of Education, Akeredolu noted that his administration has increased budgetary allocation to the education sector.

He added that no fewer than 7,400 students of Ondo State origin have benefitted from bursary awards, despite paucity of funds.

The governor, therefore, promised to do more for the benefit of the State, and commended the graduands for their doggedness and steadfastness, urging them to strive to be self-reliant and self-employed.