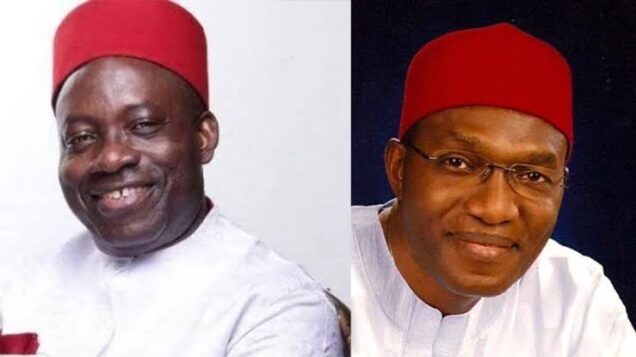 Sylvester Ezeokenwa, one of the lawyers of Anambra governor elect, Charles Soludo has alleged that Andy Uba candidate of the All Progressives Party (APC) in the November election is hoping that a judge can be compromised to upturn Soludo’s victory.

He said this after revealing that Soludo team had reached out to Uba, and there is no hope the aggrieved APC candidate would withdraw his petition.

Ezeokenwa said, “Uba’s hope is solely hinged on the belief that that the judges can be compromised. I have seen the petition and as far as I am concerned, he has no case.”

Head, Media Affairs, Soludo Campaign Organisation, Mr Joe Anatune, in an interview on Saturday said that the All Progressives Grand Alliance (APGA) in Anambra State is prepared to go to court to prove its victory in the governorship election.

He said this after Deputy Director of Uba’s campaign team, Mr Ikechukwu Onyia, said the party would pursue the governorship elections at the tribunal because it had enough evidence the elections were manipulated.

Anatune said the APGA’s victory would be upheld by the court because the election was the peaceful, free, and fair.

Anatune noted that both Soludo and APGA would be waiting for the candidate of the All Progressives Congress, Senator Andy Uba, in court “with evidence to defend Soludo’s victory.”

“We are prepared to go to court because we know the people have spoken through their votes and there is nothing the other candidates can prove to counter the will of the people,” he said.

Anatune revealed that all the stakeholders in Anambra have urged Uba to accept defeat and congratulate Soludo, but “he has made up his mind to go to court and there is nothing anybody can do.”