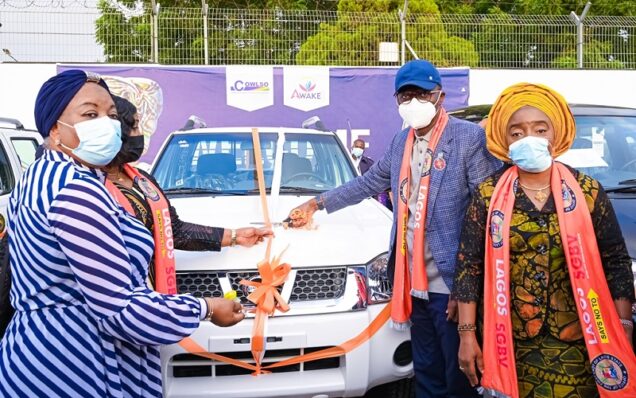 Lagos State Governor, Mr. Babajide Sanwo-Olu at the weekend presented six vehicles to agencies and Non-Governmental Organisations (NGOs) in the vanguard of the the fight against all forms of Sexual and Gender-Based Violence (SGBV) in the state.

The governor promised more intervention by the state government to support the campaign.

He spoke at Lagos House, Alausa, Ikeja during the presentation of the vehicles by his wife, Dr. Ibijoke Sanwo-Olu.

The vehicles were presented to facilitate a prompt, efficient, and effective response to the menace of rape, defilement, domestic violence, child abuse, and associated crimes.

The vehicle presentation was the highpoint of the commemoration of the global 16 days of activism against SGBV, as spearheaded in the state by the Office of the First Lady.

The governor commended all the stakeholders, partners, and donors, saying the feat clearly confirmed that a lot could be achieved working together.

“I am happy with all of our partners, the NGOs, the various offices, and the judiciary that are doing great things.

“What this means is that just keep doing what you are doing, somebody somewhere is watching, and at the appropriate time, you will be encouraged and we all need to encourage ourselves. I am sure next year, others who are also raising up the bar and they are best in class at what they do will be encouraged.

“On behalf of the government and people of Lagos State, I want to thank all of you for what you are doing. I want to thank my wife, the First Lady; the wife of my brother the Deputy Governor; everybody in the Office of First Lady, and all stakeholders that have put this together.

Earlier, the First Lady said a lot had been done to scale up the fight against SGBV.

She said it was gratifying that vehicles were being presented to further ramp up the capacities of relevant agencies to deal decisively with the menace.

“A lot has been done with regards to the 16 days of activism. We had our Community Sensitization on the 29th of November, followed by School Sensitization.

“We also took part in the Interfaith parley where we had the opportunity to talk to religious leaders (Christian and Muslim).

“In between, I went to Abuja to attend the Second Annual Conference of Nigeria Governors’ Wives Forum against Sexual and Gender-Based Violence.

“We also had the opportunity of meeting the National Union of Road Transport Workers to sensitize them on the dangers and position of the law on SGBV.

“We are presenting six vehicles today making a total of Nine vehicles we have presented to support the fight against SGBV.

“For us, we will not relent in our fight against the SGBV,” she said.

Besides the vehicles, rape kits were also donated to the Ministry of Health to help in the treatment of rape survivors.

Speaking on behalf of the beneficiaries, Permanent Secretary, Lagos State Ministry of Health, Dr. Olusegun Ogboye commended the First Lady for her passion and genuine commitment and consistency displayed to the cause against SGBV, assuring that the vehicles and the rape kits would be deployed for the intended purpose.

The donors are the Lagos State Security Trust Fund (LSSTF) and Lagos State Gaming and Lotteries Authority, while the Lagos State Signage and Advertisement Agency (LASAA) supported the 16 days of activism campaign with adverts on billboards and electronic media.