Why we handed over repatriated artifacts to Oba of Benin - Buhari 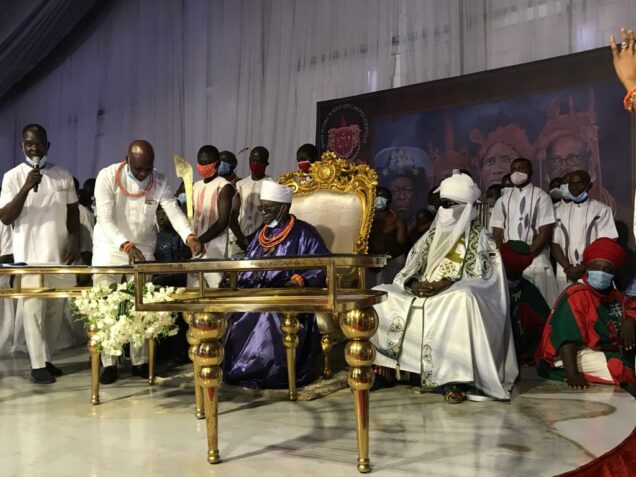 Oba Ewuare II and Emir of Kano,Alhaji Aminu Ado Bayero at the handing over of the artifacts in Benin

President Muhammadu Buhari has explained why the two repossessed Benin Artifacts were handed over to the Benin Monarch, Oba Ewuare II.

The President gave the explanation on Monday at the place of the Benin Monarch, Oba Ewuare II, during the return of repossessed two artifacts from the United Kingdom.

The Benin Palace and the Edo State Government had been at loggerheads over where the repatriated artefacts would be housed.

While the palace wanted the artifacts kept in the Benin Royal Museum, which would be built within the palace, the state government wanted the items preserved in the proposed Edo Museum of West African Arts.

But Oba Ewuare II, at a world press conference at the palace on Friday, 9 July, 2021, said that there was no controversy over the issue, as an agreement had been reached that the artefacts would be housed in the royal museum.

However, a press release from the Government House also on the same date, quoted Governor Godwin Obaseki as saying in Germany that a “transformational” museum would be built in Benin to house the artefacts upon their return, as part of a new cultural district in the city.

But, explaining while the returned artefacts were delivered to the Benin Palace, Buhari who was represented at the handing over event by Nigeria’s High Commissioner to United Kingdom Amb. Sarafa Tunde Isola, said before the artifacts were taken away from Benin Kingdom in 1897, their sovereignty was vested in Benin Kingdom under the leadership of the then Oba of Benin, Ovonramwen Nogbasi, hence they were being referred to as Benin bronze.

He added that sovereignty is now vested in the President of Federal Republic of Nigeria by the Constitution under President Buhari who now transferred them to the palace of the Oba of Benin.

Buhari, who noted that the delivery of the repatriated artifacts to the Benin Kingdom signified a breakthrough in the desire of Nigeria and Africa to repossessed African art works currently domicile abroad, advised that more emphasis should be placed on the return of artifacts rather than the circumstances leading to their removal as the push for the return continued, even as he tasked the Benin Monarch and the Palace on the safe custody of the artifacts.

He disclosed that Nigeria took possession of the artifacts on October 27, and 28 at Jesus College in England and University of Abadin Scotland.

According to him, “Our part is to ensure that these highly price objects are preserved in accordance with global best practices.

“This will undoubtedly assist in the sustained campaign to return and repossess the remaining Benin artifacts, other Nigerian and African artifacts domiciled across the globe currently.

“I have the privilege to legally transfer the two repossessed Benin artifacts, the conqueror bronze statue Cockerel, “Okpa” and an ancestral head, “Uhunwun Elao” to the Oba of Benin on behalf of President and we are also doing the legal transfer.”

“My presence in Benin Kingdom today is in fulfilment of the desire of the express directive from the president Buhari to return the repossessed artifact to where they originally belong.”

On his part, Oba Ewuare, said the return of the artifacts which coincided with his coronation and birthday anniversary, signified a new era in Benin history and civilization.

He said contrary to speculations that the artefacts would be confined and kept away from public view, “there will be no restriction” as the palace is already collaborating with the Federal Government through the National Commission for Museums and Monuments (NCMM), to build the Benin Royal Museum to house the returned artworks that would be opened to tourists, researchers, among others.

He appealed for financial assistance through specialised grant in setting up small and medium scale enterprises in Benin, including training in ICT to support the active engagement of the youths

He added that the support would help him in minimizing illegal trafficking to Europe and elsewhere, adding that the human development was the best way the kingdom could be compensated fovent of the past.

The Emir of Kano, Alhaji Aminu Ado Bayero, was present at the event.