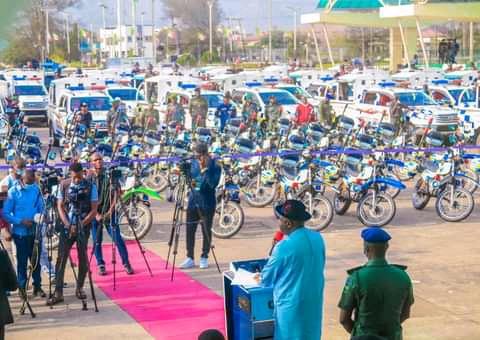 Governor Douye Diri has relaunched the rejigged Bayelsa Security outfits as part of his bid to tackle growing incidents of crimes in the state.

At the event which took place on Tuesday, Diri also commissioned 50 brand new operational vehicles, 40 motorbikes and other security gadgets to the security operatives, while he signed the state Community Safety Corp Bill into law.

The law brings the operations of security outfits such as the Operation Doo-Akpo, Bayelsa Volunteers and the Bayelsa Vigilantes under one umbrella.

Speaking at the event head at the Peace Park in Yenagoa, Governor Diri noted that the initiatives were intended to reinvigorate the security architecture of the state.

He added that the state security outfit were not established to usurp the functions of the conventional security agencies, but to support and collaborate with them in efforts to rid the state of criminals.

While acknowledging the enormous resources used to procure the assets, Diri said the priority of his administration is to ensure the prosperity of all, which cannot be achieved without security of lives and property.

He said the timing of the relaunch is appropriate as the festive season draws closer with the attendant increase in criminal activities.

Describing crime fighting as a collective effort by all Bayelsans, he appealed to security agencies to conceal the identity of informants to encourage people to report criminal activities.

He appealed to Bayelsans to provide information to the security agencies that would lead to more effective crime fighting.

The Bayelsa helmsman thanked security agencies for their role in ensuring the relative peace in the state.

He also appreciated his predecessor, Senator Seriake Dickson, for establishing the Operation Doo-Akpo in 2012, which he said has over the years assisted in combating crime.

His words: “I have just signed the Community Safety Corps Bill into law. This is intended to complement the work of the constitutional recognised security agencies.

“In line with our Action Plan for security, we have made progress in changing the mindset of our operatives, enhanced intelligence gathering, reinforced our alertness and increased mobility and response time.

After comprehensively and holistically evaluating the situation, we have made informed and tailored decisions, allowing us to re-engage Doo-Akpo even more effectively, strengthening performance and guaranteeing the safety and security of our people. Improving responsiveness also requires that we have the requisite equipment and assets.

“Consequently, it gives me great joy to re-launch Operation Doo-Akpo. Necessarily, the programme has been rejigged, redesigned and refreshed to be more responsive and responsible in carrying out its duties.

“In this first phase, I am commissioning for immediate deployment 50 brand new Hilux patrol vehicles, a new state-wide command-and-control system based on Digital Mobile Radio (DMR) Technology, 40 brand new motorcycles and a K-9-unit.”

Also speaking, Special Adviser to the Governor on Security, CP Agberebi Akpoebi (rtd), noted that the outfit had assisted in combating crime in the state, making it one of the safest states in the South- South geopolitical zone.

According to him, the swift response of Doo-Akpo to distress calls encouraged residents to believe in the capability of the outfit to ensure their safety.

Earlier, Speaker of the House of Assembly, Abraham Ingobere, stated that the Community Safety Corp Bill harmonised activities of all the security outfit established by the state government.