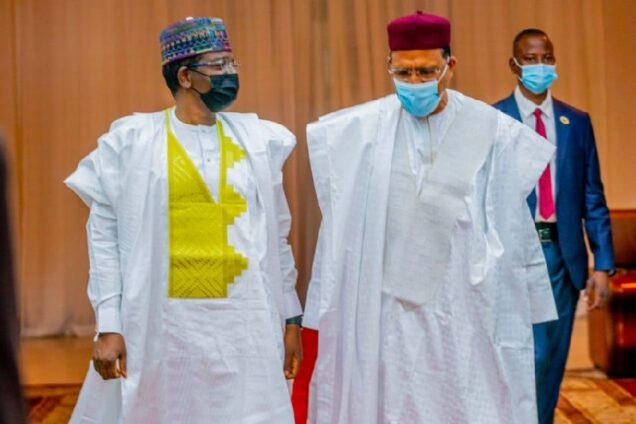 Gov. Bello Matawalle of Zamfara State and President Mohamed Bazoun of the Republic of Niger

Gov. Bello Matawalle of Zamfara has sought the cooperation of the Niger Republic to end banditry in the North West.

Matawalle, who met with President Mohamed Bazoun of the Republic of Niger, resolved to explore more areas of support and cooperation.

Both leaders discussed issues of insecurity, especially kidnapping, cattle rustling and banditry in Maradi region and parts of Zamfara, Katsina and Sokoto states.

Matawalle briefed the Nigerien president on the measures taken by the Zamfara Government to end all forms of criminal activities in the region.

He said the state government is implementing a peace initiative and reconciliation process.

“The state government is providing intelligence to security agencies on how best to trace informants of armed bandits and their collaborators,” he said.

Matawalle promised to donate five brand new Hilux vehicles to the Niger Republic Government for the special border patrol at Maradi and other parts of the country which shares border with Zamfara, Katsina and Sokoto.

He said that the vehicles would be handed over to the Governor of Maradi region at a ceremony later with the approval of Bazoum.

Matawalle requested for a regular meeting on security between the Nigerien Minister of Defence and Governor of Maradi, and Zamfara, Katsina and Sokoto states.

He explained that was aimed at bringing to an end the lingering security challenges facing the two countries.

Responding, Bazoum thanked Matawalle for the visit and the efforts he had undertaken to end the insecurity affecting the two countries, especially at the border of Maradi and North West Region.

Bazoum urged the governor to continue with the efforts to address insecurity in Zamfara by providing new methods to restore peace in the region.

He promised to support the Zamfara Government in the fight against insecurity.

Bazoum, however, requested the Nigerian governors in the North West region to ban the importation of motorcycles.

The meeting was attended by Niger’s Ministers of Defence and Internal Affairs, Chief of Staff to Bazoum, Service Chiefs and the Inspector-General of Police.