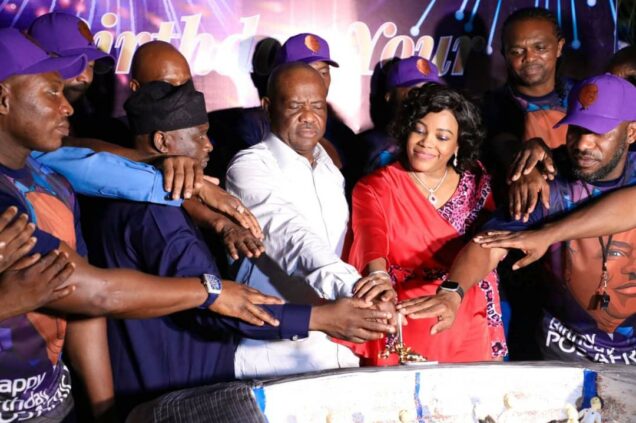 Governor Nyesom Wike said he has directed elders and leaders of the Peoples Democratic Party (PDP) in Rivers to begin the search for someone with capacity and passion to defend the interest of the state as his successor.

Wike revealed this during a birthday party organised for him by his wife, Justice Eberechi Suzzette Nyesom-Wike in his private residence at Rumuepirikom, Obio-Akpor Local Government Area of Rivers state on Monday evening.

The Governor said his successor must be someone with capacity to defend interest of Rivers.

Wike, who narrated how he was hoodwinked to attend the birthday party that was secretly organised by his wife at his sport complex, thanked God for granting him a fruitful and eventful life.

He expressed his profound gratitude to the Governor of Adamawa State, Rt. Hon. Ahmadu Umaru Fintiri, the wife of the governor of Oyo State, Mrs. Tamunominni Makinde and other dignitaries for gracing the occasion.

The governor urged people to continue praying for God’s grace to abound to him and his family on all sides.

The wife of the Rivers State governor, Justice Eberechi Suzzette Nyesom-Wike, thanked God for his steadfast love towards Governor Wike.

Justice Nyesom-Wike, who showered encomium on her husband, prayed God to grant him his heart desires as well as long fruitful life.