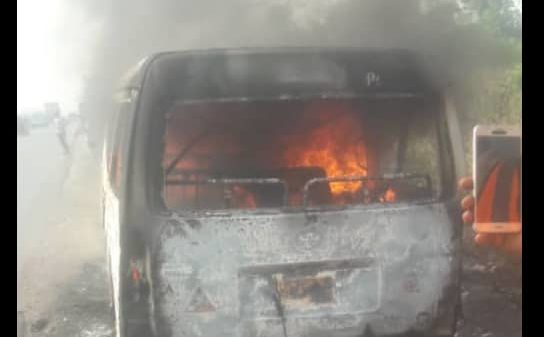 Federal Road Safety Corps (FRSC), Osun Command, has confirmed the death of seven people in a motor accident that occurred on Ilesa-Osu expressway on Wednesday.

The FRSC Sector Commander in the state, Mr Paul Okpe, in a statement made available to newsmen in Osogbo, said that a bus carrying some passengers from Zamfara lost control at about 3.45 a.m, around Osu area.

“A white Toyota Hiace bus loss control and ran under a billboard, leading to the death of seven persons, four of whom were burnt beyond recognition,” he said.

Okpe, who stated that the bus was carrying two motorcycles and some passengers as at the time of the accident, attributed it to speeding and disobedience to road traffic rule.

He said that the Federal Fire Service joined the corps to put out the fire before the victims were rushed to a nearby hospital, while the bodies of the dead were deposited in a morgue.

Okpe, however, called on motorists to be safety conscious while using the highway and observe road safety regulations.