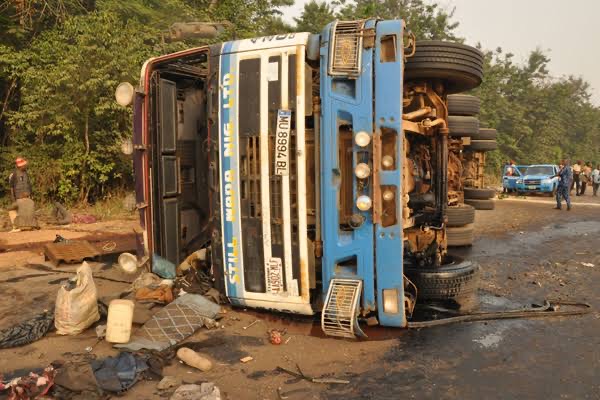 At least seven people died while 19 others sustained varying degrees of injury after a lone accident that occurred on Wednesday morning around Badeku area of Ibadan, Oyo State.

The accident at about 7 a.m. on Ibadan-Ife road, involved a truck marked OYO: NRK 312 YR.

A witness, Mr Tunde Lateef, said the truck, carrying dozens of labourers was speeding when it tried to avoid another truck coming out of Badeku Village, crossed the express road.

The truck somersaulted, throwing the people on board into different directions.

Policemen and FRSC officials carried the victims to the hospitals.

“It was a lone accident. The tipper vehicle was carrying 26 people, 19 of them injured, while seven died in the accident.

“The injured has been taken to ASBON Hospital at Gbagi area for treatment, while remains of the seven dead had been collected by their relatives for burial,” she said.

The sector commander attributed the possible cause of the accident to speed violation.