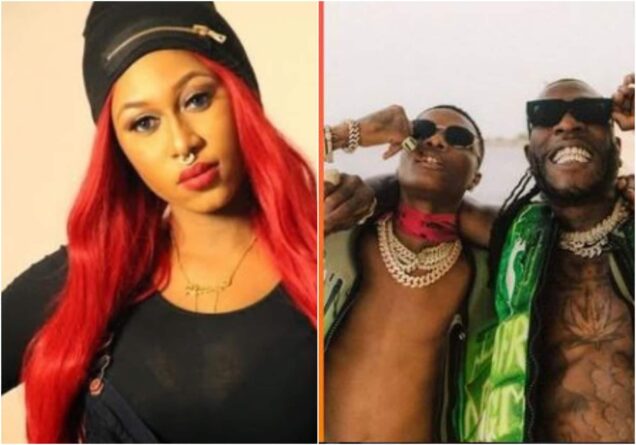 Dancehall singer, Cynthia Morgan, on Thursday gave a score of five out of 10 to Burna Boy and Wizkid’s new song, B.D’or.

Burna Boy had announced the release of the song on Tuesday, in which he collaborated with fellow Grammy-award winner Wizkid.

Commenting on the song, Cynthia Morgan said she feels the record was rushed and the melodies were incomplete.

She added that Burna Boy was ‘losing it’ with his music arrangement.

She wrote, “Burna Boy is losing it with his music arrangement. Wizkid was okay but his last 8bars was weak #b’dor” (sic)

“To me, I feel like they made this record in a hurry so I will give it a 5/10. The first nine seconds of the song was unnecessary.”

She continued, “Also with the intro? The melodies/ rhyming on the chorus is incomplete? Please I need a rematch. Shout out to the beatmaker though. You’re a boss #inspireme.”

B.D’or,produced by Nigeria-British producer, P2J, was the first hit from Burna Boy and Wizkid in 2021.

The duo had collaborated in the 2020 single ‘Ginger’, which featured on Wizkid’s October 2020 album, Made In Lagos.