Masari, Ganduje: How to defeat bandits 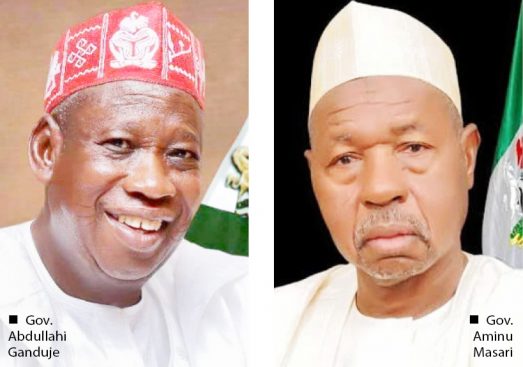 Ganduje, Masari speak on how to defeat bandits

The governors spoke in Katsina on Thursday after a condolence visit to Sen. Aliyu Wamakko (APC-Sokoto).

Some indigenes of Sokoto State were recently killed in most gruesome manner by bandits who locked them up in a bus and set the vehicle ablaze.

The governors were led by their Chairman, Governor Aminu Bello Masari of Katsina.

Speaking to journalists, Masari said: “We were in Sokoto State earlier to sympathise with the government and immediate families of those who were brutally killed in the name of banditry.

“The issue of banditry in the northwestern part of the country is not beyond us. We know the problem and the solutions are something that we as a people are capable of doing.

“This is provided that all of us take responsibility and stop the blame game. Banditry, especially our own in the northwestern part of the country can easily be dealt with if all hands are put on deck.

“This is because it has no religious colouration, no ethnic colouration, it is not ideological. It is simply pure criminality,” he said.

While acknowledging that the Nigerian Police had limitations in fighting insecurity, Masari said that security agencies required technologies to effectively tackle the challenge.

“We need to know where the bandits are recruited, at what price are they recruited, all these are issues that are very well known to us.

“These are issues we should have the capacity to do provided there is determination, there is leadership and there is political will.

“We have no alternative; we have to conquer our environment in order to survive in it. Also, we are working with the Federal Government to come up with strategies and solutions.

Similarly, Governor Abdullahi Ganduje of Kano State said that blaming each other would not bring any solution to the security challenge.

“We have seen a lot in this country. The issue started with cattle rustling that looked so simple and so indigenous. We did not even investigate it to find out what was its root course.

“We have to break that cycle. Our first challenge is how we reclaim our forests without being affected by the bandits,” he said.

Proffering a solution, Ganduje said that data must be sourced while also calling for the use of technology in the fight against insecurity.

“We must go back to the drawing board. The communities need to be involved, there must be community policing,” he said.

While appreciating the delegation for the visit, Wamakko, also the Chairman of Senate Committee on Defense, said the approach to the fight against banditry should be modified.

“The peaceful approach we are giving to security matters will not solve the problem. The fight cannot be done by merely repelling alone, we have to be on the offensive.

“We have spoken enough. What we are to do is to start implementing. No amount of money can solve this problem until there is a determination to take the right and proper action.

“The Federal Government and National Assembly have made enough provision in the 2021 Budget to security agencies to overcome these challenges nationwide.

“It is not about the amount of money, it is the approach, it is the commitment, it is the determination that can take us to the promised land,” he said.