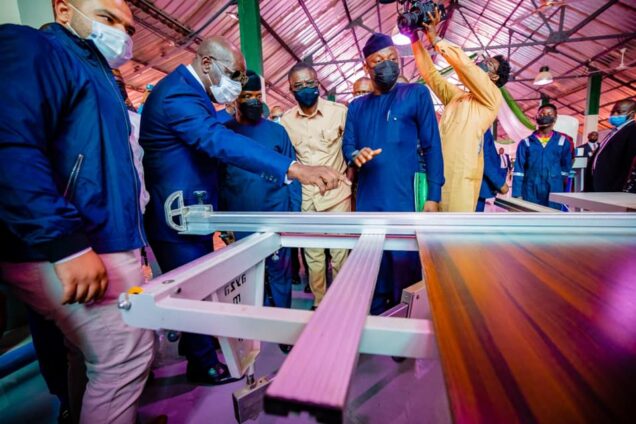 Osinbajo, Gov. Obaseki and others inside the shared cluster furniture facility commissioned by the VP in Benin, Edo State

Osinbajo who performed the inauguration of the MSME facility noted that they are of top priority to the President Muhammadu Buhari-led administration.

According to him, “This is a priority of the President Buhari administration and as we are known, they are the engine of growth for the economy.

“This facility as we’ve seen is already equipped with state-of-the-art machines and equipment, which I believe when used to full capacity, we were told can produce maybe 250 furniture items daily, including doors, tables dining tables and cabinets.

“So, I call on the MSME in Edo with the furniture producing state to take full advantage of this facility in improving their production.

“It is equally notable, I think is the fact that Edo State government is thinking of replicating furniture manufacturing clusters across the 18 Local Government Areas of the state and in some of the technical colleges.

“There are plans that whenever we found any state willing to cooperate to provide this kind of facility, we are willing and ready to support, we are ready to support all other efforts of the Governor Obaseki, either in this facility or any other MSMEs in the state.

“Our MSMEs partners will ensure that final products from here meet global standards and export to the rest of the world,” he said.

Earlier in his speech, Governor Obaseki commended the Vice President for locating the facility for furniture production in the State, describing it as a delight for him and the entire people of the State.

“I want to thank you for locating this facility in Edo State for the production of furniture, it is a delight for me and the people of Edo State that we are here to witness the beginning of another slide in our quest for making Edo State great again.

“We are blessed with the main resources required to make furniture which is timber and its available in our rain forests, and we had built a decades-old reputation for producing top quality furniture which is already shipped to another part of Nigeria and around the world.

“Mr Vice President, following your guard, we as a Government in Edo State are also undertaking initiatives to boost MSMEs production in the state.

“What we plan to do, Sir is to now use this model to build similar facilities in six of our technical colleges”, he said.