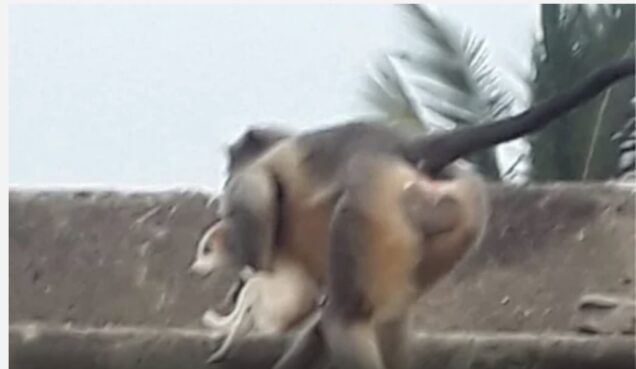 A monkey clutches a puppy to be dropped from considerable height

A war has broken out between monkeys and dogs in two Indian villages, where a a pack of murderous monkeys have killed 250 dogs and even now targeting kids walking to school.

The monkeys are said to be furious over the killing of a puppy monkey by a dog.

The enraged primates turned on the dogs, in what is obviously one sided war.

Not a single dog has survived in Lavool village, in Maharashtra’s Beed district, about 300 miles east of Mumbai, locals told News 18 .

Villagers said the killings started about a month ago when a few dogs killed an infant monkey.

Since then, the moment a dog is spotted, by a troop of monkeys, they will snatch it up, drag it somewhere high and then drop it to certain death.

In one image of the animal war, a tiny dog can be seen in the clutches of a primate near the edge of a building, where it will be dunked down to death.

“Some 10 kilometer away from Majalgaon, there is a village called Lavool which has a population of around 5000 but not a single pup is left in this village now”, News 18 reported.

The villagers decided to take action themselves and tried to wrangle up the beasts, but the simians then turned their sights on the local men, some of whom have been injured after falling from buildings while trying to save the dogs, the outlet said.

Despite killing all the dogs, the monkeys haven’t stopped and are now targeting small children en route to school, the outlet said.