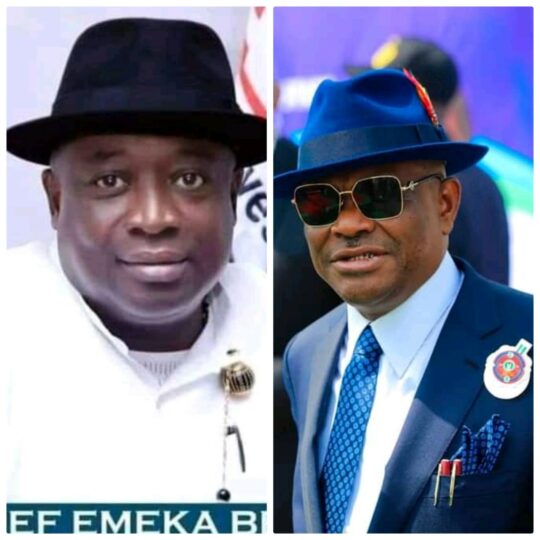 The Rivers State Chapter of All Progressives Congress, APC, has accused Rivers State governor, Nyesom Ezenwo Wike of engaging in duplicity and shifty politics in his criticisms of President Muhammadu Buhari over the delay in signing the Electoral Act Amendment Bill into law.

The observation was made by the State Chairman-elect of APC, Chief Emeka Bekee, while speaking with journalists in Port Harcourt Sunday night.

Bekee noted that shortly after the Electoral Bill was passed by the NASS, Wike had threatened to challenge it in court, if President Buhari went ahead to sign it into law.

He pointed out that Wike issued the threat on Thursday November 11, 2021, while delivering his address at the special court session in Port Harcourt to mark the beginning of the 2021-2022 Legal year.

“That was even before the bill was submitted to President Buhari for assent.

“The Governor, who faulted the amendment of clause 87 of the act, which mandates political parties to use the direct mode of primaries in electing candidates for elections, said political parties should be allowed to conduct their affairs the way they deem fit.

“He said and I quote him, ‘If Mr. President assents it, we will challenge it in court as regards the issue of direct primaries. We believe that it is an interference of internal affairs of a political party. Every party should be left on the choice of how to elect their own candidate.’

“Those were the words of Gov Wike. Every print, electronic and online media widely circulated his threat,” Chief Bekee narrated.

Continuing, Bekee revealed that as a sign of his duplicity, Wike, in less than 3 weeks started singing a different tune.

“Sadly, the governor did not surprise many by being consistent for once. He said it was doubtful whether President Muhammadu Buhari would assent to the Electoral Act, as amended by the National Assembly while speaking on an African Independent Television programme, monitored in Port Harcourt, on Thursday December 2.

“Wike queried why the president would be seeking advice from the INEC on a law that has been passed by the National Assembly.

“In less than 3 weeks, Gov Wike had made a 360 degree U-turn and ignominiously swallowed his threat. Suddenly he has become the champion and advocate for signing the Electoral Bill into law.

“To the governor, as long as there is something to reap politically, it doesn’t matter how many times one changes position on a single issue. To him that is politics, but to decent minds that is duplicity and it’s unbecoming of a governor,” Chief Bekee opined.

The APC State Chairman-elect said that Gov Wike merely confirmed his chameleon-ic antecedents when he got on Channels TV programme, Politics Today Sunday night (December 19) to cast doubt on the integrity of President Buhari and the APC on the yet-to-be-signed Electoral Bill.

“It was bewildering to see the governor cast doubt on the President and APC over the matter. In Wike’s words: ‘The President should sign the Electoral Act as amended. The President has no reason not to sign the amendment; the APC and the President are deceiving Nigerians.’ And I ask, really?

“Governor Wike is diminishing the character and stature of Rivers people before Nigerians. We are not unstable, deceitful and duplicitous people. Far from it!” Chief Bekee declared.