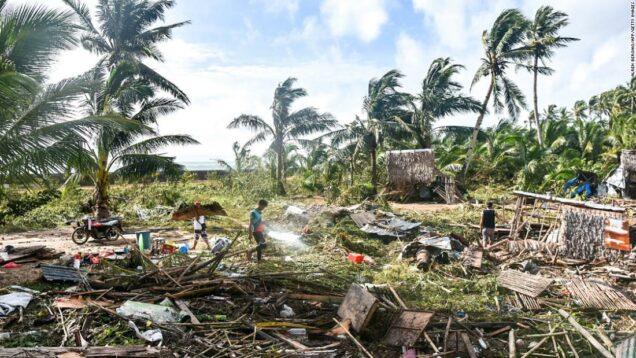 Scene of destruction caused by the typhoon in Philippines

The death toll from the strongest typhoon to hit the Philippines this year has risen to 208 people, with 52 still missing, the Police said on Monday.

The Police said 129 of the deaths were reported from the central Visayas region, which includes the provinces of Cebu, Bohol and Negros Oriental.

At least 41 deaths were reported in the southern Caraga region, where the hard-hit provinces of Dinagat Islands and Surigao Del Norte are located.

Rai slammed into the country’s east coast on Thursday and barrelled through the central and southern provinces overnight.

It flattened houses, damaged buildings and knocked out power and communication lines.

Officials were rushing relief supplies to communities where the water supply had been disrupted.

The Philippine archipelago is hit by an average of 20 tropical cyclones every year.

The strongest typhoon to ever hit the Philippines was Super Typhoon Haiyan, which killed 6,300 people and displaced more than four million people in November 2013. (dpa/NAN)