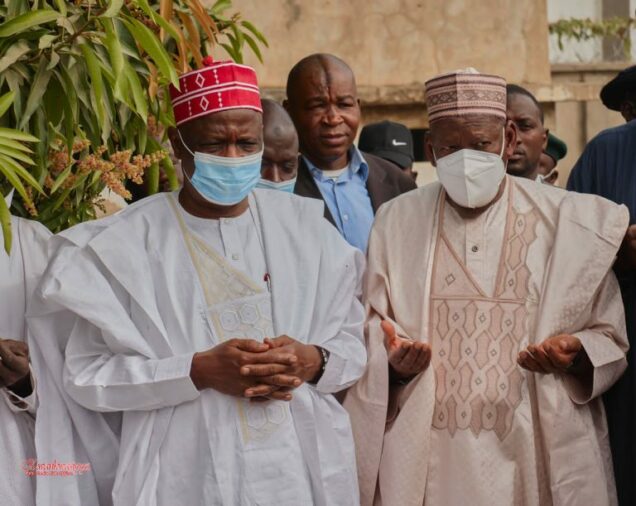 Gov. Abdullahi Ganduje of Kano State jettisons politics as he paid a condolence visit to Sen. Rabi’u Musa-Kwankwaso, a former governor of the state over the death of his brother, Inuwa Musa-Kwankwaso.

However, all they had against each other was thrown out on Tuesday as Ganduje and his political aides were well received by Musa-Kwankwaso at his residence in Bampai, Kano.

The chief of staff to the governor, commissioners, party leaders and top government functionaries were among those who accompanied the governor.

The governor prayed to the Almighty Allah to forgive the shortcomings of the deceased and give the family the fortitude to bear the loss.

After receiving the governor and his entourage, Kwankwaso invited Ganduje to the grave of his late father, Musa Saleh-Kwankwaso, located within the residence, where another special prayer was offered.

Islamic clerics also prayed for the repose of the souls of the deceased.

Musa-Kwankwaso thanked the governor for the visit.

The governor also paid a similar visit to the families of the deceased at Kwankwaso town, Madobi Local Government Area.