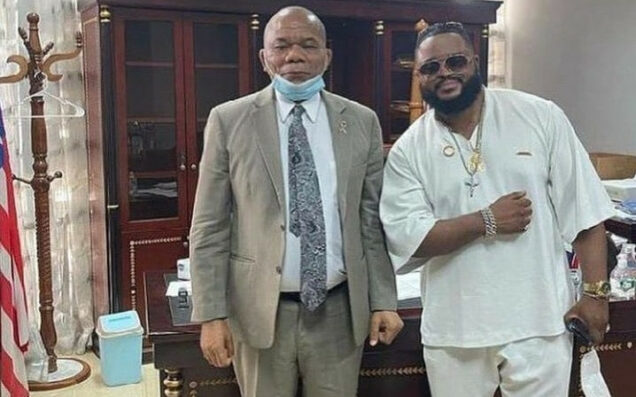 Winner of the Big Brother Naija ‘Shine Ya Eye’ Season 6, Hazel Oyeze Onou, popularly known as Whitemoney was on Monday conferred with the title of honorary member of the Liberian Senate.

The reality star was given the honour during his visit to the West African country.

He was also assigned an official government vehicle as part of his appointment benefits.

The ‘Selense’ crooner took to social media to announce the good news as he shared the video of his conferment.

In his post on his Facebook page, Whitemoney wrote, “One Might Wonder, ‘What type of grace is this?’ Having a great time in Liberia as we keep turning up.

“I have been made an Honorary Member of the Liberian Senate and also assigned an official government vehicle immediately.
Congratulations Senator.

“I owe GOD my life and dedication. I just want to thank the Liberian Senate and Everyone in line for this amazing opportunity to serve. Words can’t express how I feel inside.

In the video of his conferment, a member of the Senate could be seen conferring the honour on Whitemoney.

He took into cognizance the fact that Whitemoney will not always be in the country, adding that the reality star can contribute even from Nigeria.

“In times of voting, we’ll call you, ‘what’s your decision on this issue?” he said to Whitemoney.