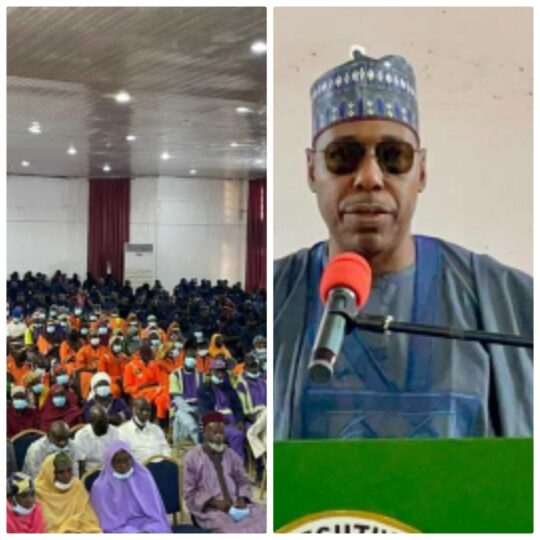 Borno State Governor, Babagana Umara Zulum, on Monday in Maiduguri, approved a one-month salary bonus for thousands of volunteers fighting Boko Haram to groups that include the Civilian Joint Task Force (CJTF) and hunters as the end of the year gifts.

The Governor included sanitation staff who are involved with cleaning up communities destroyed by insurgents before reconstruction as well as cleaners working in government establishments, agencies, and parastatals.

Governor Zulum announced the good news at the multipurpose hall of the Government House when he hosted and addressed leaders of different sectors of the volunteers and sanitation workers.

Zulum explained that the bonus, which is in addition to previous support in different ways, was to show gratitude to the volunteers for their gallantry and sacrifices in complementing the efforts of the military and other armed forces in the fight against insurgents.

“You all, our gallant volunteers, have been working assiduously to secure Borno State. Even though you are in the thousands, there is no amount of support that is too much considering the sacrifices you make. On behalf of the entire people of Borno, I convey our deepest appreciation. We are eternally grateful for all the sacrifices you have been making. Thank you so much”, Zulum said.

On sanitation workers, Governor Zulum said: “many of you rise as early as 6 am to clean the streets. Many of you are involved with the cleaning of our communities before reconstructions. We recognize that your contributions are very essential and we thank you so much.”

The Governor also announced the release of one bag of rice to each of the volunteers and sanitation workers as additional support.

Earlier, Borno State Attorney General and Commissioner of Justice, whose department of citizens’ protection coordinates the volunteers, invited the volunteers on the governor’s directive and gave a welcome before Zulum’s address.

He noted that he has regularly supported those at the front lines, those injured and families of those killed in battles.

They promised to remain dedicated to the fight against insurgents as part of their contributions to Borno State and its people.