El-Rufai to Buhari: Ramp up security, send bandits to their creator 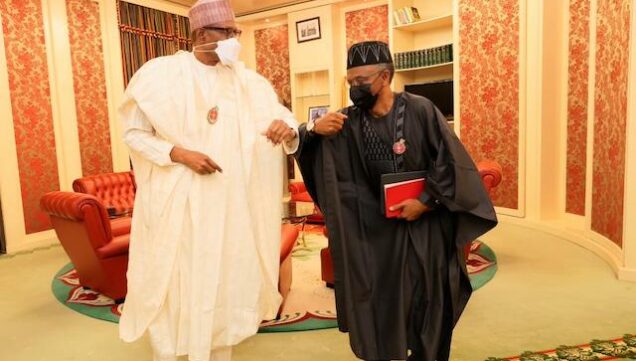 El-Rufai with Buhari in Abuja

Gov. Nasir el-Rufai of Kaduna State has given an insight into the discussion he had with President Muhammadu Buhari at the Villa on Tuesday.

His simple appeal, he said, was that security measures be ramped up to send the bandits back to their Creator.

El-Rufai, accompanied by the Commissioner for Internal Security, Samuel Aruwan, was in Abuja to brief Buhari on the latest killings in his state.

About 40 villagers were killed by terrorists three days ago.

He told State House correspondents thereafter that he updated the president on security development in his state.

He appealed for the intervention of the President for more deployment of security forces and comprehensive operations.

According to him, the security agencies have been overstretched as they are involved in various operations across the country, calling for urgent presidential intervention to check the activities of bandits and other criminals in Kaduna state

“So, you have to understand the limitations that they face before you conclude that they are not doing enough. They are doing a lot. But is it enough? Certainly not, much more needs to be done.

“We have too few number and our armed forces are overstretched. They are operating in several states, about 32, 33 states the last time we checked, and how many are they?

“So, we must understand the constraint that they face and sympathized with them.

“But with the acquisition of more advance equipment from Jordan, China, Turkey and the United States, we expect that the kinetic capabilities of our armed forces will be greatly improved.

“So, we hope to see the end of this insecurity.”

According to the governor, there is nothing like repentant bandits and that the state’s policy is to dispatch the terrorists attacking innocent people to their creator to answer for their crimes against humanity.

“There is nothing like repentant terrorists. The only repentant bandit is the one that is dead. Our intention in the state is to kill them (terrorists), let them go and see God,” he maintained.

On whether there is not intelligence to go ahead of the bandits, he said: “Yes, we receive security reports, we know a lot about the bandits and where they are and their activities.

“But you must understand that the intelligence has to be acted upon. And if the security forces are unwilling or unable to reach the locations where these bandits are, then there is nothing we can do as a state government.

“Federal security forces are not under our direct control. We support them, we work with them, the intelligence is being provided, but the truth of the matter is that our military and police are very few in number and they are overstretched.”

The governor also observed that care has to be taken in dealing with bandits to avoid collateral damage to innocent civilians.

“Even if you know where the bandits are, you don’t want to go and bomb all of them because they may have civilians in custody.

“You may have collateral damage that you may not want to handle. And without the declaration of bandits as terrorists, it might even be referred to as abuse of their human rights.”

He, however, noted that the recent declaration by the Federal High Court describing the bandits as terrorists had opened the way to fight them without limits.

“So, no one will be dragged to the international court because you killed bandits. No,” he said.

He said despite the insecurity in Kaduna, the state had continued to attracted investments even though it could have been better.

“Kaduna state is a huge state. We have 46,000 square kilometers. I joke with my colleagues from the South East, Kaduna state alone can feed the five states of the southeast two and half times.

“It’s a huge state. So, the fact that there is insecurity in one part does not mean there’s insecurity everywhere. It’s not Lagos, it’s not a small place at all.

“Yes, we’ve had investment summit and they have been very successful.

“In the last five years, we have attracted nearly three billiondollars in investments in spite of all these stories about insecurity because investors know that large parts of Kaduna state are quite safe, they are safe as anything,” he stated