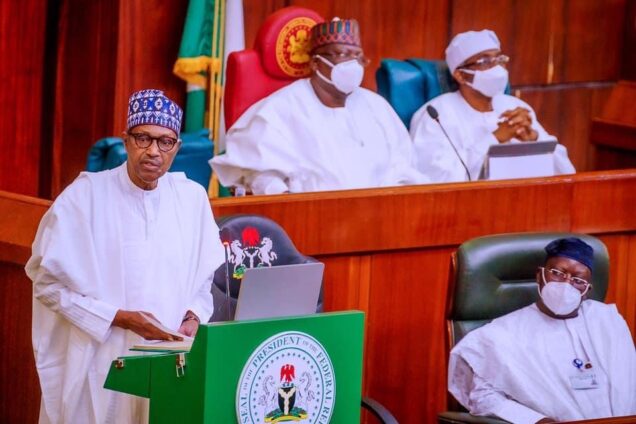 File Photo: Buhari presenting the budget before the National Assembly

An Islamic human rights advocacy group, the Muslim Rights Concern (MURIC), has described the current National Assembly (NASS) under the leadership of Ahmed Lawan and Femi Gbajabiamila as patriotic.

The group said the 9th NASS has purged itself of part-time Nollywood actors, molesters of women, idle medics, and professional tree climbers.

MURIC stated this while reacting to the early passage of the N17.13 trillion 2022 budget yesterday, Tuesday, 22nd December 2021 by the NASS.

MURIC’s reaction came via a press statement issued on Wednesday, 23rd December 2021 by its director and founder, Professor Ishaq Akintola.

“The 9th National Assembly made good its promise yesterday by passing the N17.13 trillion appropriation bill of 2022. Nigeria never had it so good. This early passage of the budget contrasts sharply with the costly, unpatriotic and anti-people procrastinations experienced under Dr. Bukola Saraki, the immediate past Senate president.

“The crop of lawmakers of today is different from that of yesterday. The 9th NASS has purged itself of part-time Nollywood actors, molesters of women, idle medics, and professional tree climbers. The 9th NASS means business. There is no scintilla of doubt that the Lawan-Gbajabiamila NASS is patriotic. It is, indeed, the people’s NASS.

“This is not sycophancy. MURIC berated the 8th NASS when it constituted itself into a clog in the wheel of governance under Saraki. It is only proper to commend the 9th NASS for passing budgets with military dispatch. The current lawmakers have shown enemies of progress the art of genuine legislation. This is lawmaking without tears, lawmaking with a human face, lawmaking with the fear of Allah and lawmaking with the people’s interest in the lawmakers’ hearts.

“In comparison, the 2020 budget was passed on 17th December 2019 by the current NASS. The 2021 budget was passed on 21st December 2020 and yesterday, 22nd December 2021 witnessed the passing of the 2022 budget. The 9th NASS has been consistently consistent in its humane approach to the passing of Nigeria’s appropriation bill. The difference is clear even to the blind. The 8th or the 9th NASS, Saraki or Lawan, who is more budget-friendly?

“Posterity will remember the different roles played by Saraki and Lawan, in the lawmaking process and leadership of the NASS. Nigerians already know the villain just as they know the hero. They know the enemy of the people. They know those who love the hoi polloi.”