Buhari, Zulum mum over bombings in Maiduguri ahead of President's visit 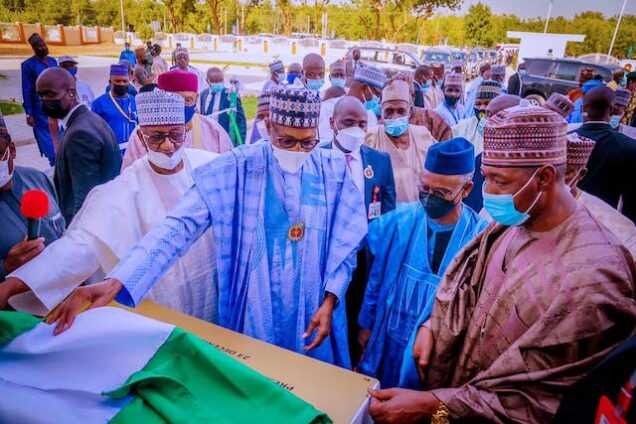 President Muhammadu Buhari and his host Governor Babagana Zulum have kept a disquieting quiet over the bombings in Maiduguri about one hour before Buhari landed on Thursday.

At least five people were killed and more than a dozen injured after several explosions near an air force base, residents and a hospital source said.

Four people were killed in Gomari Ayafe area, a few hundred metres from an air force base, residents said.

Buhari landed at the base less than an hour after explosions were heard in neighbourhoods near the base.

“We have received four dead people and 15 others injured that we have recorded,” a doctor at Umaru Shehu Hospital, where the injured were taken, said.

Hussaini Garba, a resident of Ajilari Cross, another Maiduguri neighbourhood, a few kilometres from the air base said he had just left home for work when he heard a loud bang.

He rushed home only to find his house badly damaged and his 18-year-old daughter lying dead.

“My house and that of my neighbours are both destroyed, nothing is left in the house,” Garba said.

The military and presidency declined to comment. And Governor Zulum did not comment on it, while thanking the people for turning out to give Buhari a warm reception.

Buhari did not comment on the explosions during his visit to Maiduguri to commission some projects, including a road bypass.

However, he told troops at the air base that his government was working towards “the defeat of all adversaries and restoration of an economically viable north east geo-political zone and other parts of the country where Nigerians are free to go about their activities without fear or harassment.”

Nigeria under Buhari’s watch is gripped by worsening insecurity, including the Boko Haram and ISWAP insurgency in the northeast, and banditry and kidnappings in the northwest.