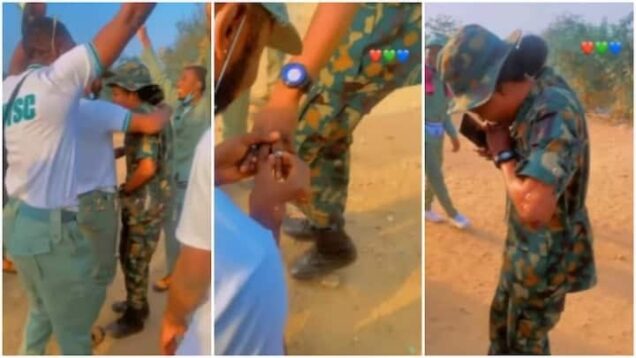 The family of a National Youth Service Corps (NYSC) member who proposed to a female soldier (Private Sofiyat Akinlabi) have apologized to the Nigerian Army.

The Corps member simply identified as Remi proposed to the female soldier during the orientation exercise at the NYSC camp in Yikpata, Kwara State.

It has led authorities of the Nigerian Army to arrest the soldier for alleged fraternization.

The Director of Army Public Relations, Brigadier General Onyema Nwachukwu, said that Akinlabi’s action amounted to taking advantage of her trainee, noting that she would be punished in line with extant military laws.

However, a member of the corps member family who spoke to Punch on the condition of anonymity appealed to the army to temper justice with mercy and release the soldier.

“We appeal to the Nigerian Army to tamper justice with mercy and release her. She is a woman and she has emotions. We don’t want her to be dismissed; we want her to continue her job in the military.”

The family source revealed that the corps member and the female soldier had known each other years back even before Akinlabi became a soldier.

However, they lost contact and met again at the NYSC camp leading to the marriage proposal.

“They have known each other before they got to camp. They met in Abeokuta over three years ago before she joined the Army but lost contact some time ago. Meeting at NYSC camp was like a reunion.

“They have been friends all along and Remi thought it wise to seize the opportunity of their meeting again to propose to her. He had to walk up to her as a man and not worry about her new status as a soldier because she would eventually get married.

Petitions by both activists have garnered over 10,000 signatures for the release of Akinlabi.