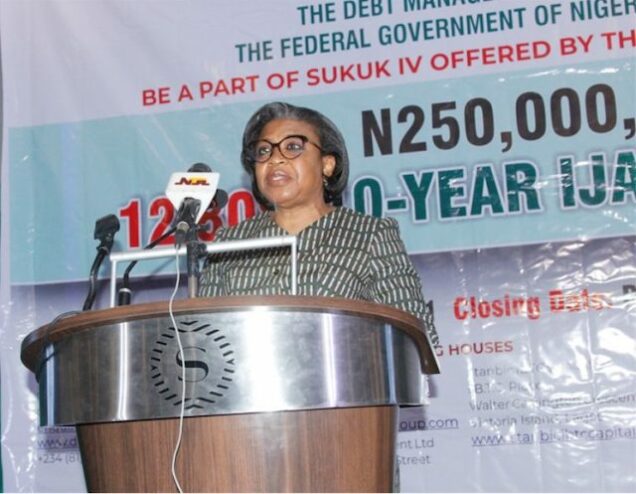 Director-General of the DMO, Ms Patience Oniha made this known in a statement on Saturday.

Oniha said that the massive response was an indication that the idea of growing the domestic investors’ base and promoting financial inclusion through Sovereign Sukuk was achieved.

She stated that the over-subscription by 346 per cent emanated from high level participation by banks, fund managers and non-interest financial institutions.

“The N250 billion Sovereign Sukuk whose offer opened on Dec. 16 closed on Dec. 23, with an unprecedented subscription level of over N865 billion.

“This outcome represents a subscription level of 346 per cent.

“An analysis of the subscription data revealed high levels of subscription from banks and fund managers (including pension funds), as well as non-interest financial institutions, ethical funds, cooperative societies and retail investors.

“The increasing level of participation by a more diverse and larger number of investors is a confirmation that the DMO’s objectives of issuing Sovereign Sukuk to grow the domestic investor base and promote financial inclusion is being achieved,” she said.

Oniha said that high level of subscription was a vote of confidence on the DMO’s past Sukuk offers.

She reassured that the proceeds would be used to finance rehabilitation and reconstruction of road projects across the country.

“The high subscription level is proof of investors’ acknowledgement of the impact the N362.57 billion Sovereign Sukuk issued between 2017 and 2020 has had on the development of road infrastructure in Nigeria.