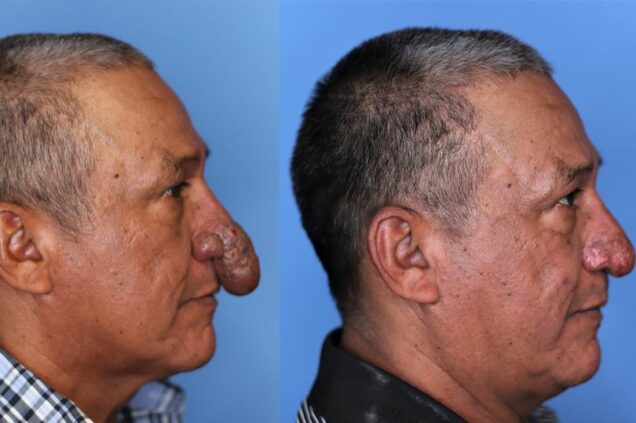 Conrado Estrada with his disfigured nose, left and after surgery

Conrado Estrada, a New York state resident who had spent most of his life hiding his penis-like nose with a face mask has undergone miracle surgery,

He will live happily again in time for Christmas, reports New York Post via Daily Star.

Estrada spent years having trouble eating and breathing due to a rare condition that made the tip of his nose grow to an incredible size, and looking like a penis.

The 57-year-old painter and construction labourer said people would “stare” at him and “children would ask their mothers what happened” to him.

“They would stare at me,” the Portchester, NY resident told The New York Post.

“Children would ask their mothers what happened to me — and I would get around it by using a face mask all the time.”

As well as feeling self-conscious about his large feature, the oversized nose also obstructed his speaking, caused snoring and massively got in the way of day to day tasks.

“It had reached my lips and whenever I took a bite when I ate that would touch the spoon,” he said.

“This was a bad one,” Romo told The Post.

It appeared he had “a penis on his nose,” according to Romo’s description.

He went on: “It was a smouldering infection… and it would have just kept going.

“I don’t mind telling people what I think,” Romo admitted.

The plastic surgeon claimed that if he hadn’t treated the infection “it would have just kept going”.

The condition is called rhinophyma.

People with the condition have thickened, pimpled and pitted skin at the tip of the nose due to enlarged sebaceous (oil) glands.

“I had spent six years seeing doctors and skin specialists and nothing would get better,” said Estrada.

Confidence in an individual makes “a better and more productive person in society,” said Romo.