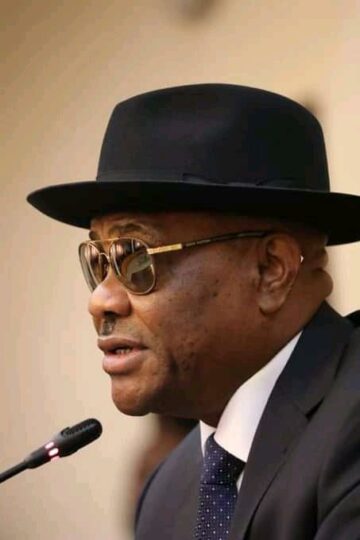 The Rivers Chapter of All Progressives Congress, APC has said it is greatly dismayed by what it described as ‘inciting advice, given by Governor Nyesom Wike to the four newly appointed judges into the State judiciary.

APC claimed Wike had advised the newly sworn- in Judges to resist attempts by the National Judicial Council, NJC, to discipline erring colleagues in the State.

Wike said: “If what is going on now is not stopped by NJC, I can assure you no political matter will go before any judge and that judge will have any courage to handle such matter.

The intimidation by NJC on these judges is quite alarming and I have to say it clearly: if you don’t give your Judges support to do what they’re supposed to do, then let us better forget that in 2023 that we will have it easy.

“From next year (2022), it will be very turbulent and so matters will come before judges, allow them to dispense the matter the way they think it is.”

But reacting to the Governor’s postulation, the APC in a statement on Saturday accused Wike of psyching the new judicial officers to walk the path of a few judges whose conduct, according to it, had led some Nigerians to believe that a section of the Rivers State judiciary operates as ‘Wike judicial supermarket.”

The reaction of the party was contained in a statement signed by Senibo Chris Finebone, its spokesperson.

The party alleged that Wike’s advice was spurred by the recent axing of Justice Okogbule Gbasam by the NJC for his unprofessional handling of the case between Wike’s PDP hirelings versus the former National Chairman of the PDP, Prince Uche Secondus.

APC noted that Justice Gbasam who handed down many curious rulings in matters concerning Rivers APC record is now dented forever after he was and punished by the NJC.

The party however noted that majority of judges in the State judiciary have maintained and protected the dignity of their persons.

The party urges such judges to continue in their path of honour.