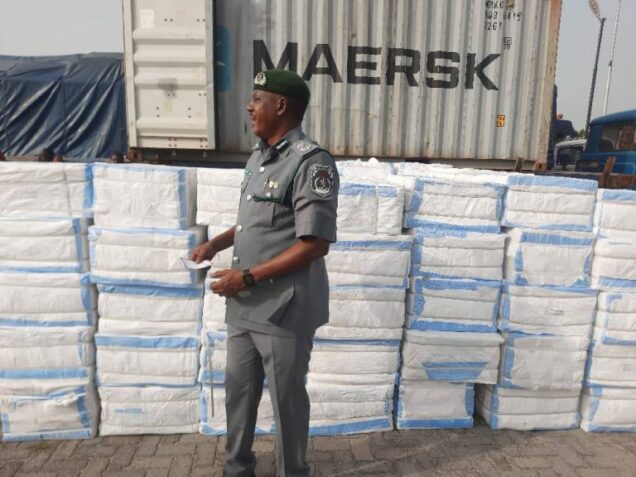 The Nigeria Customs Service (NCS), Seme Command, said it has intercepted some items suspected to be tramadol capsules concealed with packaged jumbo size adult diapers in a container.

Mr Hussain Abdulahi, the Customs Public Relations Officer, in a statement in Seme, said the container number is MRKU 9090415.

Abdullahi quoted the Customs Area Controller, Comptroller Bello Jibo, as saying the container was handed over to the Command on Nov. 15, by the Republic of Benin Authorities under transit to Nigeria.

Jibo said that the container came under the watch of officers of the Command as no importer or his representative has come forward to continue the process of clearance procedure.

“On the Dec. 20, Seme Customs Service invited other security agencies and stakeholders to witness the examination of the said container.

“The items discovered during 100 percent examination are 200 packages of adult diapers, 100 cartoons of Gabadol 120mg suspected to be tramadol equivalent to 360kg.

“The diapers were smartly arranged at the front of the container while the drugs were was the back.

“I directed that samples be taken out officially and handed over to National Agency for Food Drug Administration and Control (NAFDAC) to ascertain and confirm the drugs,” he said.

The controller said that the command had initiated a full-scale investigation with a view to fishing out those involved in the illicit importation.

He warned the perpetrators of unlawful activities to avoid the command or meet their Waterloo.

According to Jibo, officers and men of the Command are not losing guards at ensuring that smuggling under any guise is brought to the barest minimum.

The controller said facilitation of legitimate trade remains the cardinal objective of the command.