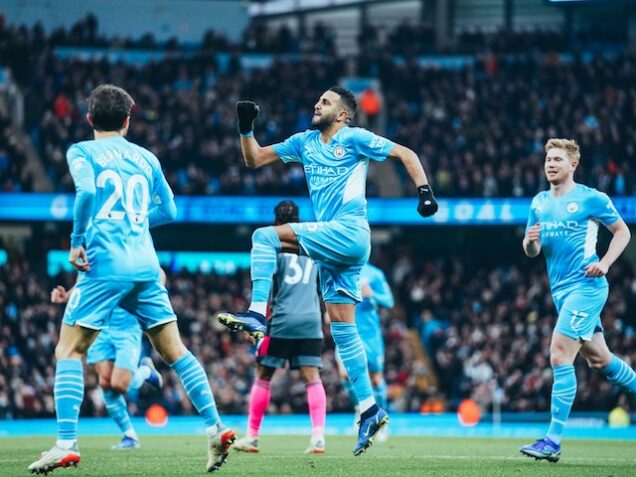 Mahrez jumps for joy after scoring for Man City

Arsenal cruised 5-0 away at Norwich, Manchester City survived a Leicester revival to hang on to a 6-3 win, while Tottenham trounced 1-man Crystal palace in London derby.

That was the summary of the Boxing Day Premier League games, dampened by COVID-19 crisis, that made the league cancel three matches.

Manchester City had built up within 25 minutes, an insurmountable 4-0 lead against Leicester at the Etihad on Sunday when they almost collapsed to a spirited Leicester City fightback.

But they survived to earn a thrilling 6-3 victory, a ninth Premier League win in a row moving them six points clear the top of the standings.

With second-placed Liverpool not in action after their clash with Leeds United was postponed due to COVID-19 cases at the Yorkshire club, City appeared out of sight midway through the first half at the Etihad Stadium.

Things went from bad to worse for a Leicester side struggling to replicate last season’s form, with Ilkay Gundogan and another penalty, converted by Raheem Sterling, giving the hosts a four-goal lead inside 25 minutes.

Despite looking dead and buried, Leicester stormed back in the second half as goals from James Maddison, Ademola Lookman and Kelechi Iheanacho threatened to derail the league leaders.

Aymeric Laporte’s 69th-minute header and Sterling’s late second took the champions over the line, however, as they moved on to 47 points, six clear of Liverpool, from 19 matches. Leicester dropped to 10th.

Moura created goals for Harry Kane and Son Heung-min and bagged one for himself as Tottenham comfortably beat a Palace side for whom manager Patrick Vieira missed the game because of a positive COVID-19 test.

While victory moved Tottenham up to fifth in the table, it proved a dispiriting day for Palace who faded after a decent start and were reduced to 10 men in the 37th minute when Wilfried Zaha was stupidly sent off.

By that time Tottenham were well in control after Kane swept in from Moura’s pass before Moura headed the second.

Arsenal travelled to Carrow Road, Norwich and completely outclassed Norwich City 5-0 to cement their 4th position on the league table.

The comprehensive victory was the London club’s fourth Premier League win and five in all competitions.

Bukayo Saka scored once in each half, sandwiched by a fine Kieran Tierney strike and an Alex Lacazette penalty and Emile Smith Rowe’s injury-time strike.

Arsenal have now moved within three points of third-placed Chelsea, who will meet Aston Villa later on Sunday.