2021 so bad for Nollywood: Behold 18 actors, actresses who died 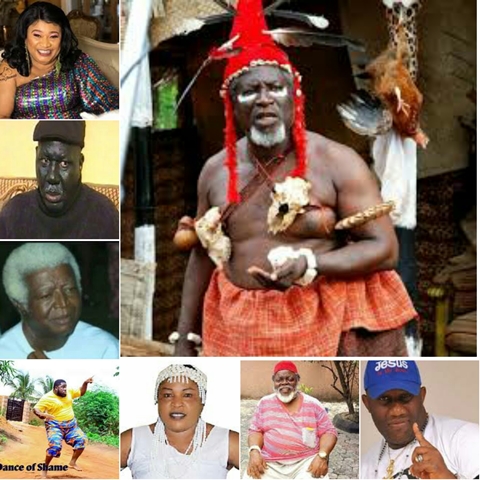 Some Nollywood stars who died in 2021

In three just three days time, the year 2021 will be history. For the Nollywood industry in Nigeria, 2021 has been a very bad year. This is because 18 actors and actresses could not make it. They have to change their permanent address to the great land beyond, they died.

Almost every month of the year, there have been weeping and wailing as veteran actors and actresses, as well upcoming ones passed on. The year has left bitter tales in the industry.

Below are actors and actresses who died before then end of 2021.

Veteran Yoruba actress, Folake Aremu, popularly known as Orisabunmi was the first causality recorded from the movie industry after she died on the 5th of January 2021.

Orisabunmi who was a native of Olla in Kwara State died at age 60 at her residence in Ibadan, Oyo State. She was said to have died after a brief illness.

A famous Nollywood actor, radio broadcaster, and writer, Jim Lawson Maduike passed away on the 9th of January 2021 after complaining of body pains earlier.

The veteran actor later slept and didn’t wake up the following morning.

He joined the Nollywood movie industry in 2004 and has since acted in more than 150 movies.

David Mela was a fast-rising Nollywood actor before death cut short his life on January 11, 2021

According to Idoma Voice, the talented actor was suffering from an undisclosed ailment, and he already took a break from social media for weeks.

Dan Nkoloagu became the third veteran actor to depart the Nigerian film industry after his death was announced by his son Dan Nkoloagu junior on Facebook on January 23, 2021.

But he died on January 22, according to the post made by the son.

Nollywood actor Ernest Asuzu who had been down with stroke also gave up the ghost on 26th, January 2021.

The news of his death was confirmed by his wife, Jennifer Asuzu.

Ernest Asuzu began his acting career in the ’90s and rose to prominence after he starred in the 1997 Nollywood classic, ‘Rituals’

He was the toast of Nollywood until his career nosedived after he came down with a stroke in 2015, and it affected his speech. He was also bedridden for three years.

His neighbour had to break down the door to his apartment before they found his lifeless decomposed body seated in his sitting room.

The veteran actor died on 10 April, after losing a protracted battle with diabetes and blindness. He was aged 68.

He died at the National Hospital Abuja. Bruno, the Abia state born actor, had been in coma for about three weeks before giving up.

Bruno Obinna Iwuoha acted in many films and also won several awards in his career.

He won the Best Supporting Actor award at the 3rd Africa Movie Academy Awards for his performance in the movie “Sins of the Flesh”.

Aleja was a contributor to several Nollywood flicks and a collaborator with Kunle Afolayan and Tunde Kelani.

He attended Orile Owu Grammar School and graduated with the class of 1978-1983.

The actor died on 11 August after months of illness. Before his death, a video of the actor went viral where he was lying on his sickbed seeking financial assistance from well-meaning Nigerians. The illness led to his death.

Oganiru had featured in over 300 movies. Some of them are Queen of Hasso Rock, Wasted Effort, Pay Day, Lacrima, Stoneface in Love, Givers Never Lack, His Majesty, Yellow Fe Rich Odichinma Azu ver, My Destiny, Battle Of The Rich, Political Control, among others.

Okoro, an actor who normally played comedian roles in movies, had been a fast rising star.

The actor’s death came a day in which another Nollywood actor, Rich Oganiru, died weeks after reports of his ill health surfaced online.

Dike died after being hospitalised for weeks, Emeka Rising, Chairman of the Actors Guild Association (AGN).

The popular Nollywood actress died on 31 July. She was said to have died of malaria and typhoid.

Oniga featured in scores of Nollywood movies —both English and Yoruba— before her demise.

Born on May 23, 1957; the delectable actress began her career in 1993. Her first movie was the blockbuster, Onome, while her debut movie in the Yoruba speaking sector of the film industry was Owo Blow.

The 64-year-old actress used to work for a European engineering consultancy firm with its regional head office in Nigeria.

In the span of her career, which was about 27 years, the multiple award-winning actress featured in movies like The Wedding Party, The Royal Hibiscus Hotel, 30 Days in Atlanta, Sango, Out of Bounds, among others.

The veteran actor, best known for his role in the Nigerian TV series ‘Tinsel,’ died on 27 August. He was 69-year-old.

The actor became incapacitated for five years following a car accident he was involved in, along the Apapa-Oshodi Expressway.

The actor was reportedly driving to a film set in 2016 when the accident happened.

In 2018, the actor requested financial aid to facilitate his treatments outside the country, after two years of being incapacitated. Shortly after, Nigerian billionaire, Femi Otedola, agreed to settle his bill of about N39m.

An accomplished stage and screen actor, Olaotan warmed his way into the consciousness of television viewers, playing the character of Fred Ade Williams on the Mnet flagship soap “Tinsel”.

An actor of vast credit, Olaotan has featured in films such as “Three Wise Men”, alongside Richard Mofe-Damijo and Zack Orji, “Love struck,” and “Lotanna”.

The veteran actor died on 28 October after battling an undisclosed illness.

Until his death Johnson was one of the popular faces in the movie industry with a career spanning over two decades.

In his last days, Johnson became a regular in most of the TV drama series created by Africa Magic.

The veteran Yoruba actor, whose real name is Babatunde Omidina, died on 22 November at the age of 63.

Baba Suwe began acting in 1971 but came into the limelight after he featured in a movie titled, Omolasan, a film produced by Obalende.

He became more popular after he featured in Iru Esin, produced by Olaiya Igwe in 1997.

He had featured and produced several Nigerian movies such as Baba Jaiye jaiye, a movie that featured Funke Akindele and Femi Adebayo.

In 2011, he was accused of cocaine trafficking by the National Drug Law Enforcement Agency, an allegation that was described as false and defamatory by the ruling of the Lagos high court of law.

The actor, who was diagnosed with kidney cancer in 2020, passed away on 15 December.

Before his death, Fubara starred in many Nollywood productions including Smart Money Woman, Castle and Castle, Quam’s money, Royal Hibiscus Hotel and others.

The veteran’s actor’s death was announced by the president of the Actors Guild of Nigeria (AGN), Ejezie Emeka Rollas.

Obiago is a Nigerian born Nollywood actor, film maker, TV personality and movie producer who has featured in over 100 Nollywood movies.

Obiago had a career in the banking sector before he quit the banking for Nollywood and movies. Heo had worked with Ecobank Nigeria Nig. PLC and with Access Bank.
He was the Managing Director and the CEO of FINCRAFT Sarl Lt.
Obiago started acting in Nollywood movies in 2013 and has risen to be one of the star actors in the Nigerian movie industry.
Sam Obiago often plays the role of Kings, fatherly roles in movies.
Tags:   Nollywood