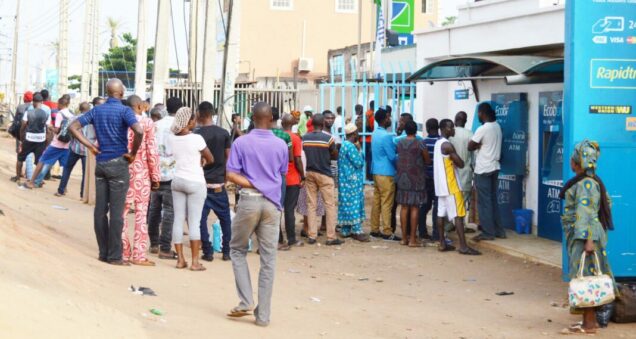 FILE PHOTO: A long queue of customers at an Automated Teller Machine (ATM)

Many bank customers in Ibadan were on Tuesday, stranded at various automated teller machine (ATM) points in Ibadan.

A NAN correspondent who visited some banks at Challenge, Ring Road, Dugbe, Bodija and Iwo Road areas, observed that virtually all the ATMs did not dispense cash.

Also, most banks at Ring Road, including the First Bank and Polaris Bank, were not dispensing cash.

Long queues were also noticed at Access Bank in Challenge, while most customers were seen moving to other banks to see if their ATMs would dispense.

Most of the customers in some of the areas said that poor network might be responsible for the situation, while other machines did not have cash to dispense.

A customer, Mr John Adeyemi, expressed frustration over his inability to access cash through an ATM machine since Dec. 24.

“I have been moving around since Dec. 24 looking for where to withdraw, but all to no avail.

“I don’t know why banks should not load their ATM machines, especially at a period like this. We expect better services from our financial institutions,” he said.

Another customer, Mrs Victoria Ayeni, said that she had to drive from Challenge to Ring Road to withdraw money but could not achieve the purpose.

“I have been moving from bank to bank. You hardly see any ATM machine dispensing.

“The one I met at Zenith Bank at Mobil will dispense once and stop again due to poor network service,” she said.

Similarly, Mr David Ogundele, said that he had gotten tired of moving around and thus, opted for withdrawal through P.O.S.

He, however, said that most P.O.S operators were also having the same network and dispensing issues.

“The one I used debited me without bringing out cash, worsening the already bad situation.

“We are tired of this whole thing. Any little thing, people will say government. Is it also the government that will come to load ATM machines with money?” he queried.

However, a security man in one of the banks, who preferred anonymity, however, said that the bankers loaded the ATMs with money before the holiday.

“There is no money again because people keep coming and withdrawing. We hope the situation will be better, as work resumes tomorrow,” he said.

A banker, who preferred anonymity, said that most ATMs, including those of UBA and First bank, had no cash to dispense.

“Even the money we loaded in our own bank (Union Bank) has finished because of heavy withdrawals by customers, but we’ve just re-loaded our ATMs now,” he said.