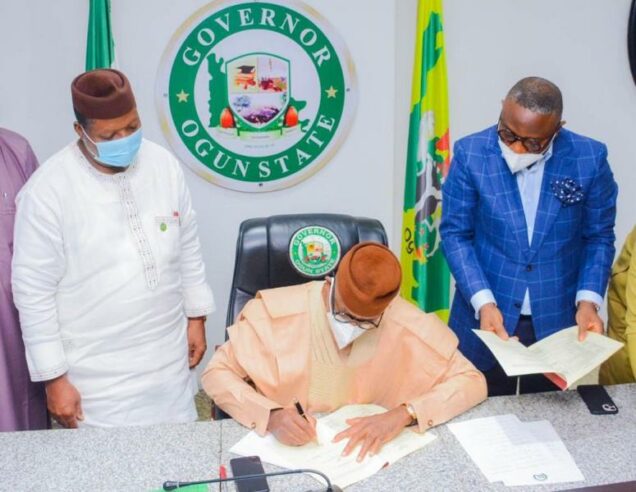 The budget was passed by the Ogun State House of Assembly on Wednesday passed.

A statement by the governor’s chief press secretary, Kunle Somorin said, the State House of Assembly had earlier in the day passed the exact figure of N350,735,149,739.57 contained in the State’s 2022 budget with adjustments in some recurrent and or capital estimates of about 182 agencies.

Passage of the budget came barely a month after its presentation by the State Governor, Prince Dapo Abiodun to the State House of Assembly

The passage of the bill was consequent upon the presentation of the report of the House Committee on Finance and Appropriation by its Chairman, Olakunle Sobunkanla, who thereafter moved the motion for its adoption, seconded by his Vice, Ganiyu Oyedeji and supported by the whole House through a unanimous voice vote.

The appropriation bill was later read and adopted clause-by-clause by the Committee of the House presided by the Speaker, Rt. Hon. Olakunle Oluomo at a the plenary held at the Assembly Complex, Oke-Mosan, Abeokuta.

The Assembly in the course of legislative process on the appropriation bill, carried out slight adjustments in the recurrent expenditures of about 144 agencies, just as the capital expenditures of 38 other agencies were equally adjusted.

Signing the bill at his Oke Mosan office, Governor Abiodun thanked the members of House led by Olakunle Oluomo, for the speedy, but thorough passing of the bill.

He assured that his administration would put machinery in place to ensure optimum performance of the budget.

Abiodun further said his administration would continue to espouse projects that would affect the state’s socio-economic activities positively.

The governor, however, urged the House to continue giving the incumbent government in the state its support so that it could continue to deliver on its electoral promises.