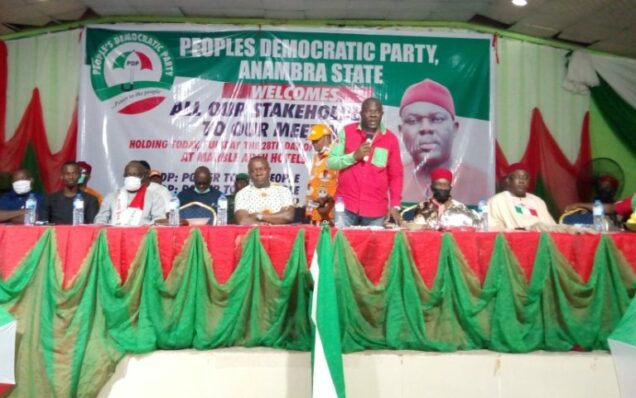 Ndubuisi Nwobu, Chairman of PDP in Anambra speaking at the stakeholders' meeting

The Anambra chapter of Peoples Democratic Party (PDP) has vowed to punish members who worked against the party in the November 6 governorship election.

The election was won by Professor Charles Soludo, the candidate of All Progressives Grand Alliance, APGA.

The candidate of PDP, Valentine Ozigbo, came second in the election.

But speaking at a stakeholders’ meeting in Awka on Tuesday, Ndubuisi Nwobu, Chairman of PDP party in Anambra blamed the inability of the party to win the election of saboteurs within its ranks.

Nwobu said the party went into the election with the best candidate in the person of Mr Valentine Ozigbo who, according to him, said did his very best to ensure that the flag handed to him took the party to the government house.

Nwobu, at the expanded meeting attended by 138 party top shots convened to take a retroactive look at the governorship election, said many factors militated against the mandate while thanking Sen. Uche Ekwunife for working hard, despite not being favoured for the ticket of the party.

“All those who left us, don’t be surprised they will start sneaking back. If they come in, we will give them the back seat where they deserve. It will be a lesson for tomorrow because if we don’t do it, people will continue in wrong acts.

He said PDP said it would no longer tolerate a situation where members left the party to join other political parties during the election only to return afterwards, adding that such people would be given the back seats instead, upon their return.

On his part, Sen. Ben Ndi-Obi said any party that didn’t have discipline cannot win an election.

“We must learn to sanction erring members.

“Today, we still have cases in court by PDP members. I will champion that those people be sanctioned. We cannot continue like this. We have bigwigs in the party, and we must strive for a united PDP,” he said.

Mr Valentine Ozigbo, candidate of the party in the election, also attended the meeting.