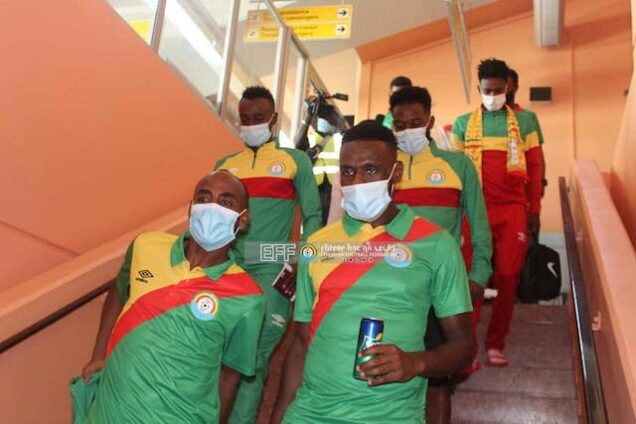 Four members of the Ethiopian delegation to the 2021 Africa Cup of Nations in Cameroon have tested positive to covid-19, the local sports newspaper, Sports Glitz reports

The Ethiopians were the first team to arrive in Yaounde for the tournament, followed by the Sudanese.

Two days upon arrival in Cameroon, 4 members of the Ethiopian delegation tested positive for Covid-19.

“Results of the tests came in yesterday morning. Immediately, as expected, all members who tested positive were quarantined, with the medical team further monitoring other members of the Ethiopian delegation”, the paper reported.

The Ethiopian squad arrived on Sunday for the TotalEnergies Africa Cup of Nations 2021 finals, set to kick off on 9 January 2022.

The delegation landed at the Nsimalen International Airport of Yaounde.

As part of their preparations, coach Wubetu Abate and his charges have a friendly, scheduled on Thursday, December 30.

They will take on Sudan’s Falcons of Jediane at 3:30 pm.

Ethiopia are in group A alongside: Cameroon, Burkina Faso and Cape Verde.

Ethiopia starts her campaign against Cape Verde on January 9.