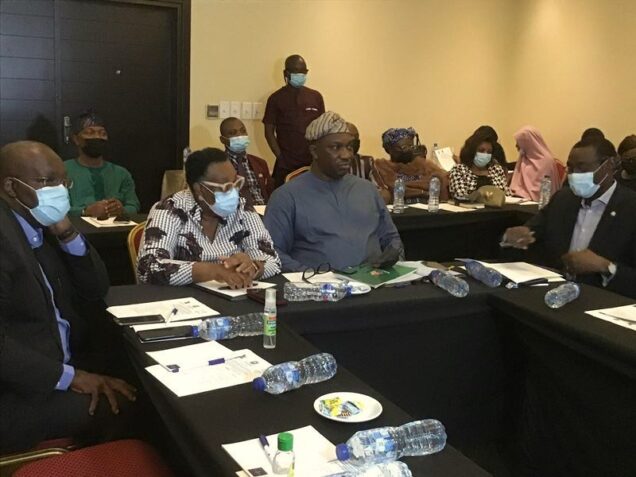 Commissioner for Economic Planning and Budget, Sam Egube and others at the event

The Lagos State Government on Wednesday said it would soon launch the implementation of the state’s demographic dividends roadmap to add value to governance in terms of informed plans and programmes targeted at sustainable economic growth and development of the state.

He said Demographic Dividend is the accelerated economic growth generated by the decrease in mortality and fertility of a country, followed by a progressive change in the age structure of the population: the young dependent population (under 15 years) becomes shrinking relative to the population of working age.

“The dividend or demographic ‘window of opportunity’ is identified as a logical potential that can be harnessed or not by the countries during the period of demographic transition. Their use depends on several aspects such as economic, institutional conditions of state, operation of the financial sector and family behaviour, among others,” he explained.

The commissioner said Lagos State was the first state in the country that resonated with the initiatives of developing a demographic dividend roadmap by engaging a consultant, with the support of UNFPA.

Egube said the government embarked on a research to bring into the fore the benefit accruable from effective population plans, programmes and projects that could herald a new thinking in terms of population management and control through the identification and promotion of Demographic Dividends in Lagos State.

“This led to the development of a Demographic Dividend policy brief in 2017 presented to the past Executive Councils and the consequent directives that the policy brief be accommodated as part of planning machinery of the state. Thus, all MDAs are expected to be sensitised on the need to include demographic dividends into their programmes and projects in line with their ministerial mandate and existing Lagos State Development Plan,” he explained.

“The State had also developed a Demographic Dividend policy roadmap, validated by the respective heads of MDAs and awaiting printing and launch. The change in government leadership ad the inauguration of new Executive Councils in 2019, coupled with retirement of some permanent secretaries that were hitherto championing the entire process, has made it expedient to organise a comprehensive workshop for the current executive councils members as well as the permanent secretaries to sensitise and update them on the Demographic Dividend policy of the state as well as the necessary next line of actions to be taken towards a hitch-free implementation of the policy,” he explained further.

In his presentation on “Harnessing the Demographic Dividend in Lagos State,” Dr. Noah Olasehinde of the Department of Economics, University of Ibadan, stated that demographic dividend is multi-sectoral and multidisciplinary in content and understanding, saying that knowledge of demographic dividend, although growing, is still limited in Lagos.

He said data issues were still prevalent, urging Lagos State to address Migration Data issue, adding that the quality and magnitude of the support ratio was key to harnessing the demographic dividend.

“Stakeholder engagement is key. Institutionalisation is essential (estimation, monitoring, and process of reaping the benefits),” he said.

In his presentation, “Harnessing the Demographic Dividend in Lagos State: The next Step,” Prof. Olanrewaju Olaniyan of the Department of Economics, University of Ibadan, asserted that in Nigeria, every 100 working age adults is supporting additional 98 dependents, while in Lagos State every 100 working age adult is
supporting additional 68 dependents.

On harnessing demographic dividend, Olaniyan stated that quality institutions, policies and resources were necessary to keep up with growing populations.

He explained that if urbanization was not well managed and soon, Lagos state would likely not sustain the momentum of economic growth or human development, and lose some of its demographic dividend.

“Competitiveness is determined by factors such as infrastructure, educational and research institutions,
and the quality of public administration. Much depends on the ability to nurture and absorb its talents through the generation of decent work.”

According to him, “The starting point of policies required to harnessing DD in Lagos State is to have good understanding of the population dynamics of the state to appreciate the size, distribution, projected age structure and the pace of the projected growth. This is where the dynamics of migration is very important for the state

“Ensure rapid Demographic transition through reduction in both fertility and child mortality rates. Children from low fertility sections will be more productive than their peers from high fertility parents since they should have had more invested in their education and health just because there were fewer of them.

“Reduce dependency ratio and thereby increase savings and investment because families will spend less on children’s education, health and other needs; responsible management of child/teenage marriage and teenage pregnancies.”