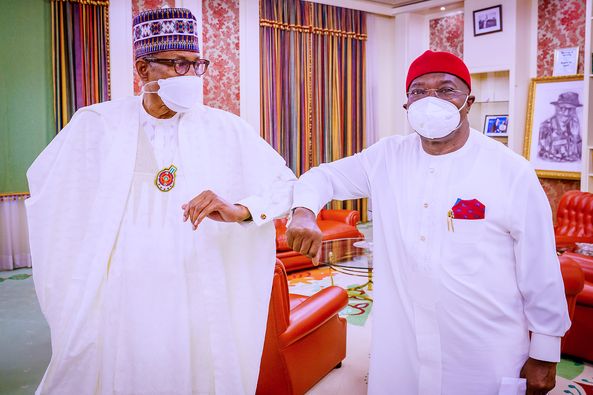 After his meeting with the president, the governor fielded questions from journalists at the State House where he explained why an Igbo person should be considered for president by 2023.

Ikpeazu said Igbo were pan-Nigerians who live and invest everywhere in the country and said they are more knowledgeable about the country than other groups.

However, he noted that the issue of Igbo presidency in 2023 cannot be a matter of right but something that should be achieved through negotiations and conversations.

The Abia governor also said he is not interested in contesting the 2023 presidential election.

He said such ambition would amount to shortchanging his people.

“I’m not interested in the presidency. I’m very busy as governor and thinking about what I will become now will amount to shortchanging my people who gave me a mandate for an initial four years and renewed it for another four years and it will terminate around May 2023.

“We are yet in 2021 and it will be self-serving for me to begin to think about what I will become instead of concentrating on serving my people for time they elected me.

“Having said that, I think that the south easterners have a right to take a shot at the presidency of Nigeria and I dare say that our qualification starts from the fact that we understand and know Nigeria better than the other states of Nigeria.

“Today, a lot of people, on a lighter note are afraid of Sambisa. But for an Igbo man, Sambisa is a business opportunity.

“So, it will be preposterous of me not to add my voice to that one.

“However, the question of Nigeria president of southeast extraction is a national question that require negotiation, discussion and conversation with all parts of this country and I am least qualified to determine what happened in 2023.

“I also want to spend my time supporting the incumbent president to do his time and do his best while we wait for what happens to begin to unfold. So, these are my views about the presidency.”