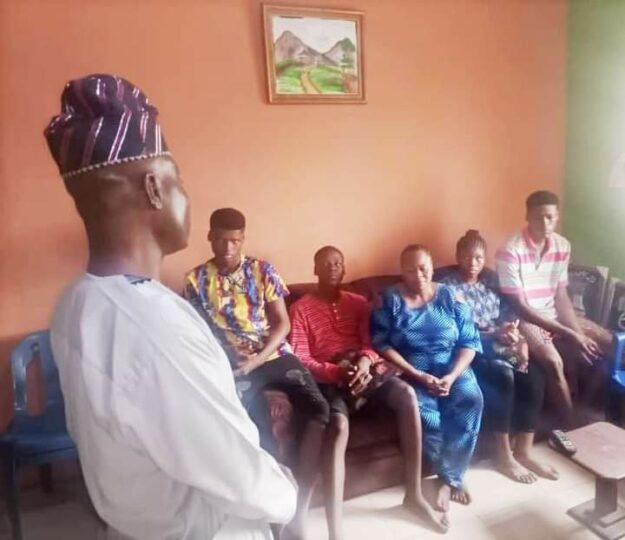 The Executive members of the Nigerian Union of Journalists (NUJ) Lagos State Chapter, on Tuesday, visited the Surulere home of the former National President of the union, Mr. Bonnie Iwuoha, where they condoled with his widow and four children.

Bonnie Iwuoha died in Umuahia, on Monday, December 20, 2021, during an illness.

Commiserating with the family, the Chairman, Adeleye Ajayi, described the late Comrade Iwuoha as a peace-loving gentleman, who apart from occupying the highest office in the union, was always ready to contribute towards its progress.

Iwuoha, according to the Chairman, had a stabilising influence which made it possible for him to intervene and douse tension whenever the need arose.

Ajayi said the former NUJ National President was a trustworthy reconciliator who was always relied upon by the union to ensure peaceful conduct of elections and assured that the union would not abandon the family in their trying time.

The Lagos NUJ delegation, which also included the Secretary, Tunde K. Olalere; Internal Auditor, Isaac Jimoh Ayodele; and Ex-Officio member, Oluwakemi Ishola, prayed with the family, committing their care and guidance unto the hand of God.

On hand to receive the delegation were the widow of Comrade Bonnie Iwuoha, Mrs. Adanna Iwuoha, his 19-year old first son, Samuel Iwuoha, and his siblings, namely Daniel, David and the only daughter, Esther.

Amidst sobs, Mrs. Iwouha described her late husband as a deeply committed family man; one who was also a kind, peace-loving gentleman with whom she had gone through thick and thin in their 26-year old marriage.

Mrs. Iwuoha recalled that for nearly eight years, the marriage, formally contracted in January 1995, did not produce a child, but rather than go astray, her husband waited patiently and prayerfully till God answered their prayers in 2002 when the first son was born.

My husband was a true Christian. At the Christian Fellowship Centre on 23 Association Avenue, Ilupeju, Lagos, where he was an elder, if there were four pillars in the church, he was one of them, she said, adding that the late Iwuoha had an unusual way of giving each of the children their names even while they were still in the womb.

He had plans for each of our children. Now, he is gone, and their future is uncertain, she lamented in tears, as the NUJ Lagos State Council Chairman gave her words of comfort.