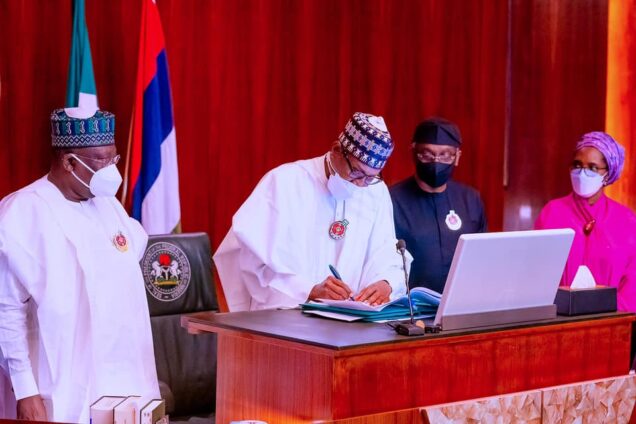 Flanked by the President of the Senate, Ahmad Lawan, the Speaker of House of Representatives, Femi Gbajabiamila as well and Zainab Ahmed, his Minister of Finance and other top government officials, President Muhammadu Buhari on Friday signed the 2022 Appropriation Bill as well as the enabling 2021 Finance Bill into law.

The President said he signed the Bill into law despite his reservations about many of the changes that the National Assembly made to the Executive proposal to enable its implementation to commence on 1st January 2022 as has been the tradition for some years now.

“This Administration remains committed to the early presentation of the annual appropriation bill to the National Assembly to ensure its passage before the beginning of the fiscal year,” the President promised as he signed the Budget with aggregate expenditures of N17.127 trillion, an increase of N735.85 billion over the initial Executive Proposal for a total expenditure of N16.391 trillion to law.

The President noted that he approved the increase of the budget proposal by N186.53 billion to cover expected expenditure on additional critical expenditures and he consequently authorized the Minister of Finance, Budget and National Planning to forward the request for the increase to the National Assembly.

Aside this, the President noted that the lawmakers mutilated and padded the original 2022 Executive Budget proposal with insertions of new projects, outright removals of others, as well as reductions and/or increases in the amounts allocated to projects.

For one, Buhari noted that the lawmakers increased the revenue expected for funding of the budget by N400 billion without indicating where the additional money will come from.

Also, the lawmakers reduced the amount allocated to sinking fund for retiring of Bonds that will mature by N22 billion without any explanation

The President also said the lawmakers reduced the amount set aside for payment of Non-Regular Allowances of the Police and the Navy by N15 billion and N5 billion respectively, an action he described as worrisome “because personnel cost provisions are based on agencies’ nominal roll and approved salaries/allowances.”

The President also noted that the lawmakers unilaterally increased overhead allocations to some ministries, departments and agencies, MDAs of government by N21.72 billion, while the sum of N1.96 billion was cut from the provision for some MDAs without apparent justification.

Buhari also noted that while National Assembly increase in the provision for Capital spending (excluding Capital share in Statutory Transfer) by a net amount of N575.63 billion, from N4.89 trillion to N5.47 trillion, it went ahead to reduce allocation for some some critical projects.

On the contrary, President Buhari noted that members of the National Assembly included new provisions totaling N36.59 billion for National Assembly’s projects in the Service Wide Vote which negates the principles of separation of Powers and financial autonomy of the Legislative arm of government.

The President noted that the lawmakers reduced provisions for many strategic capital projects in favour of their own ‘Empowerment’ projects to the detriment of the nation.

“The cuts in the provisions for several of these projects by the National Assembly may render the projects unimplementable or set back their completion, especially some of this Administration’s strategic capital projects.

“Most of the projects inserted relate to matters that are basically the responsibilities of State and Local Governments, and do not appear to have been properly conceptualized, designed and costed.

“Many more projects have been added to the budgets of some MDAs with no consideration for the institutional capacity to execute the additional projects and/or for the incremental recurrent expenditure that may be required,” the President noted.

Buhari also lamented that while the National Assembly increased projected revenue by N609.27 billion, the additional Executive request of N186.53 billion for critical expenditure items could not be accommodated without increasing the deficit, while the sum of N550.59 billion from the projected incremental revenues was allocated at the discretion of National Assembly.

Consequently,the President Buhari said while he signed the 2022 Appropriation Bill into law to enable its implementation to commence on 1st January 2022, he will revert to the National Assembly with a request for amendment and/or virement as soon as lawmakers resume from their yuletide break.

This, he said he will do to ensure that critical ongoing projects that are cardinal to his administration, and those nearing completion, do not suffer a setback due to reduced funding.