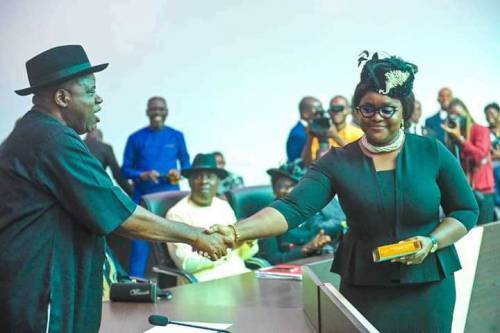 Gov. Diri and his wife, Patience Ama Zuofa Diri during the swearing in ceremony

Gov. Douye Diri of Bayelsa State on Thursday administered the oath of office on four newly-appointed high court judges in the state including his second wife, Patience Ama Zuofa Diri.

The other judges sworn in by the Bayelsa Governor are former Registrar of the Bayelsa State High Court, James Lookie, a Law lecturer at the Niger Delta University, Dr Simon Amaduobogha, and legal practitioners, Mrs Christine Enegesi.

The Chief Judge of the State, Justice Kate Abiri also witnessed the swearing-in of the four judges.

After taking their oath of office at the Executive Council Chambers of the Government House, Yenagoa, Diri urged them to be above board in the discharge of their sacred duties.

“I once again congratulate the newly sworn-in judges on your appointment. Indeed, as you assume your respective high and exalted offices as judges of the High Court, I urge you to serve the people of Bayelsa with unfailing zeal and commitment.

“Let your actions and decisions be steered solely on unprejudiced and faithful application of the constitution and our written laws, our ethics and values as a people and the superseding interest of justice. May God continue to bless Bayelsa State, and the Federal Republic of Nigeria,” he said.

There were also judges, senior lawyers, including Mr. Kemeasuode Wodu (SAN), other top government functionaries, as well as families and friends of the new judges.

Diri joins his Rivers counterpart Nyesom Wike in having a wife on the bench.