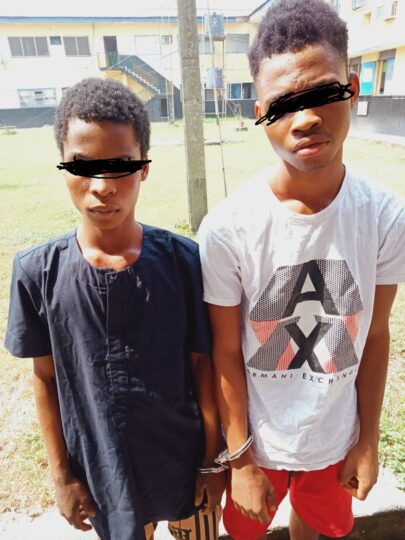 Police operatives in Edo have arrested a 13-year-old boy, Destiny Osevaru and Godstime Obioko (18) over alleged abduction of an eight-year-old baby, Testimony Akioyame, in Uromi, Esan North-East Local Government Area of the State.

Osevaru and Obioko had subsequently took their victim to an uncompleted building where they tied her down with intent to demand for ransom from her parents.

The victim was however lucky to be rescued by a good Samaritan who found her tied down in the building, while her captors were away.

While narrating the incident, Edo Police Command spokesman, SP Kontongs Bello, in a statement: “On 28/12/2021 at about 1300hrs one Testimony Akioyame ‘F’ (8) of Arue Uromi in Esan North-East was brought to Uromi Police Divisional Headquarters by a good Samaritan, he informed the police that he found her tied down in an uncompleted building at Erue community of Uromi.

“On receipt of the girl and the information, the police operative immediately swung into action and arrested the duo of Godstime Obioko ‘M’ (18) and Destiny Osevaru ‘M’ (13) all of Erue community in Esan North-East Local Government Area who confess to have abducted the girl, tied and kept her in an uncompleted building while they left her there to charge their phone so that they can be able to contact her parents. On coming back, they discovered that the girl has been rescued by unknown person.

“The suspect further confess that they intend to demand for Five Hundred Thousand Naira (N500,000.00) from the parents before she was eventually rescued. Investigation is still ongoing, the suspects will soon be charged to court when investigation is concluded,” the statement concluded.

Also, the police spokesperson announced the arrest of one Over Jamker, who escaped from Oko Correctional Center during the #EndSARS protest of 2020, over his involvement a kidnap incident.

Bello, revealed that Jamker, the prison escapee who hailed from Delta State and others now at large, abducted four persons from two different places in Benin metropolis.

The names of the victims are given as Kelvin Omonedo (M), Adeleke Wasiu (M), Irene Edenabuohen (F) and Rosemary Ojegue (F).

“On the 29/12/2021 at about 1430hrs operatives of the Edo State Police Command through Ugbowo division led by the Disional police officer (DPO), CSP Albert Udeme received information that hoodlums suspected to be kidnappers have kidnapped Kelvin Omonedo ‘M’, Adeleke Wasiu ‘M’ at Olienhen Street and proceeded to Ukhumwem Road in Benin City, where they also kidnapped the duo of Irene Edenabuohen ‘F’ and Rosemary Ojegue ‘F’.

“On receipt of the information, police operatives from the division immediately swung into action, trailed and engaged the hoodlums in a gun duel. The superior fire power of the team of operatives made the hoodlums to abandon the (4) victims and arrested one of the suspects, Over Jamker.

“Efforts is ongoing to arrest the fleeing gang members,” the statement said.

Meanwhile, the State Commissioner of Police, CP Philip Aliyu Ogbadu, while thanking the public for prompt information which eventually led to the arrest of these criminals and rescue of the kidnapped victims, also restated his commitment to safe-guarding of life and prosperites of residents of the State.