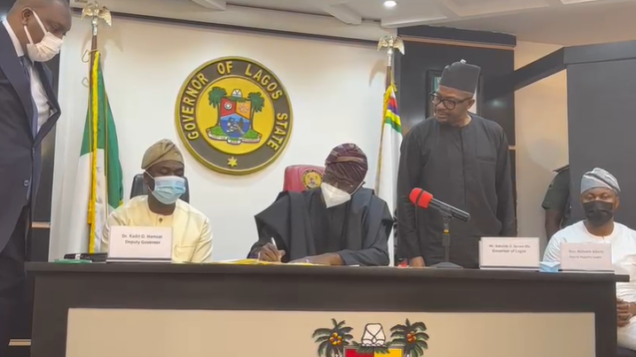 The Budget is Christened: “Budget of Consolidation”.

The governor assented to the bill at the State House, Ikeja, Lagos, Southwest Nigeria.

The Lagos State House of Assembly on Wednesday evening passed the 2022 budget estimate with a slight increase of the grand total from the initial N1.38 trillion to N1.758 trillion.

Speaking after the budget signing, Sanwo-Olu noted that the budget is expected to consolidate on the programmes of the THEMES Developmental Agenda in Education, Infrastructure, Health, Rail, Technology, Social Intervention, Sustainable Development Goals, and other critical areas.

While explaining the rationale behind the increase from the initial N1.4 trillion Budget Estimates presented to the Lagos State House of Assembly, Sanwo-Olu noted that there was the need to capture all financing options for the Blue and Red Line Rail projects by not putting pressure on cash flow and Debt sustainability.

Chairman, House Committee on Appropriation, Gbolahan Yishawu, who represented the Speaker of the Lagos State House of Assembly, Mudasiru Obasa stated that the budget was given expeditious approval with proper scrutiny within five weeks to ensure that all projects are executed.

The budget was passed at a sitting presided over by the Speaker of the House, Mudashiru Obasa, after a presentation of the report by Hon. Gbolahan Yishawu, chairman of the Committee on Economic Planning and Budget.

Yishawu, after the plenary, explained that the total budget size passed has addition of left overs from the previous allocations in the 2021 budget.

He said the leftover was rolled into ‘contingency fund’ in the Y2022 budget.

He also put the Capital and Recurrent Expenditure ratio at 66:34.