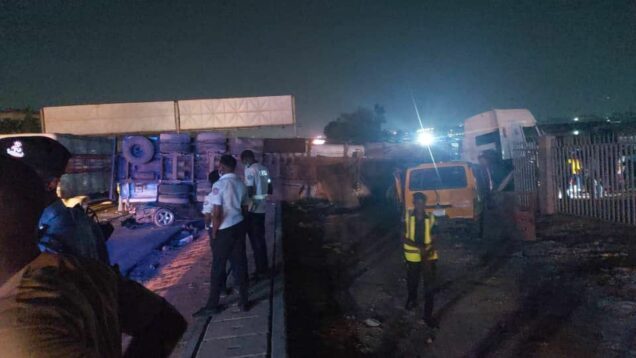 He said further information gathered revealed that the tanker lost control due to mechanical fault ( brake failure), hit the Honda accord from the rear before falling onto the Toyota Corolla.

“Seven casualties received on the spot treatment from the pre-hospital care unit while four others were extricated and taken to the Trauma center.

“No fatality was recorded at the scene of the incident while traffic is being diverted along alternative routes.

“The operation is being severely challenged by miscreants intent on scooping the PMS while residents are urged to avoid use of naked flame,” he said.

Oke-Osanyintolu also said another accident on the same road involved an articulated vehicle with an unknown registration loaded with diesel which has been cordoned off for transloading of product which is ongoing.